York County can – and must – connect with grieving Connecticut community, Part II 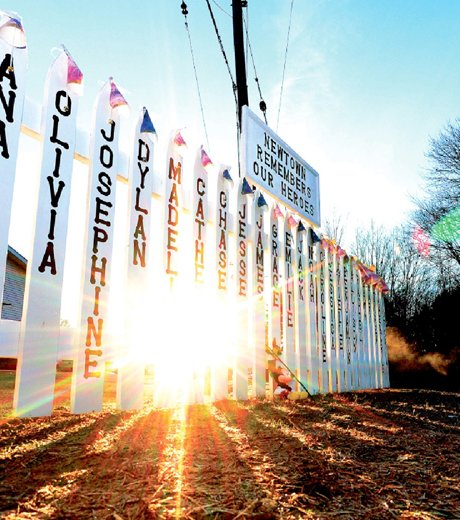 A rising sun illuminates the memorial near the entrance road to Sandy Hook Elementary School in Newtown, Conn. Tom Kelly IV, a West Chester Daily Local News photographer, captured this scene. Kelly as well as seven journalists from the York Daily Record/Sunday News and about 25 other visiting journalists helped sister newsroom the New Haven Register cover the shooting of 20 children and six adults at Sandy Hook school. This image came from  coverage of the shooting in a New Haven Register special section. Also of interest: Unthinkable in Newtown: York County can – and must – connect with grieving Connecticut community, Part I.

This is another in a series of York Daily Record/Sunday editorials written on Christmas, Easter and Thanksgiving. I’ve done this for maybe 20 years so there’s 60 of these around.

This one ties themes from Christmas with the shootings in Newtown, Connecticut:


The Christmas story can be applied to a nation that is coping with the terrible Newtown shooting.

That story’s lesson goes to the root of our search for solutions to our problems as a nation.

Much of that search is veering toward legislation — the fight to control automatic and semi-automatic weapons, for example.

And in the other camp, you have people who seek a solution to our school and workplace violence by arming themselves which such weapons.

That’s an old debate and might prove to be a waste of energy.

The real transformative solution comes through the dissemination of ideas of peace and goodwill and people taking personal responsibility for those ideas.

That’s a piece of the Christmas message.

Christians believe Jesus was born in a lowly state, in an lonely stable. He grew up as a carpenter’s son in a remote area of Israel, perhaps making plow handles, benches and tables.

As the son of God, Christians believe, he had the power to grab the reins of government.

And, in fact, he allowed the government to take his life.

But he chose to teach and preach ultimate messages — teachings about our relation with God.

Some Christians see this as a vertical post of the cross, healing the relationship between God and man.

And Jesus’ messages also went horizontally — the horizontal beam of the cross — messages of peace and goodwill to our fellow men.

So here’s where those messages about involved relationships with our neighbors link up with Newtown.

We must become increasingly self-aware as we live our lives about Jesus’ message that we must love our neighbors.

For example, if we are aware of a young neighbor who is the subject of bullying, we should find a way to intervene, even though it’s not our child.

When our schools sponsor anti-bullying or D.A.R.E programs, we should not complain that they are taking away from valuable academic time.

We can make up the academics with our children in the evening and reinforce those anti-bullying messages.

If we purchased a violent video game for our children this Christmas or for a birthday, we should quietly return it to the store.

Some in Red Lion would like to forget the student shooting of the district’s middle school principal 10 years ago or a madman’s machete attack on elementary school students shortly before that.

But here come many families from Columbine, writing to Newtown:

“Our hearts go out to your families. We lived it, we know what you’re facing. If there’s anything we could do to ease the pain, we would. Our prayers go out to you, that God sends comfort and strength… .”
That’s the idea, putting the ideas of Jesus and Christmas into motion.

This Christmas, we must seek to understand Jesus’ ideas toward our neighbors and about life and apply them to our lives.

Also of interest
– Read messages from families of Columbine to residents of Newtown.
– Check out these first-person accounts of York journalists who helped in coverage of the shooting in Newtown.