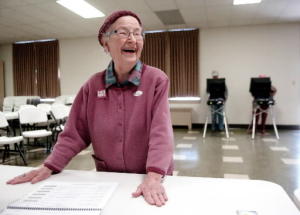 Elizabeth Marshall was York’s first elected female mayor and member of city council. She was a recent mugging victim in her beloved city. Background posts: Images capture hope for racial harmony and Rainmaker’s visit indicated much awry in York.
A news story this week told about the assault on former York mayor Elizabeth Marshall.
Marshall, who was not seriously injured, vowed to not let the incident take over her life… .

“When any person goes through a traumatic event, I think it is something they need to grow away from and not let it haunt them. That’s what I’m trying to do,” she told the York Daily Record/Sunday News.
Some may want to know a bit more about Betty Marshall, a non-native who gained a place in history as York’s first elected female mayor and city council member.
The following is from York Daily Record/Sunday News files, as adapted from AAUW’s “Legacies” booklet:

Born: 1918
Family: Late husband, Howard; two sons and a daughter
Known for: Becoming the first elected female mayor of York (1978) and the first woman on city council (1972).
Education: Certificate from Lowell Commercial College in Lowell, Mass.
Occupation: Secretary, local government official
Accomplishments: Helped narrow Market Street to encourage pedestrian shoppers. Helped build two additional parking garages. Ran a “Back to the City” residential gentrification project. Helped restore buildings on the square. Helped create an industrial park.
Honors/awards/recognition: Was among the first group of mayors selected by the U.S. State Department to visit Hungary in a program to visit countries behind the Iron Curtain.
Community involvement: She was a volunteer with the York YWCA, York Little Theatre and Wilson Elementary School PTA. She was active in the League of Women Voters and served on the board of the National Organization for Women and York’s first Charrette symposium to address urban issues. Active participant in the U.S. Conference of Mayors and the National League of Cities.
Excerpt from “Legacies”: “By encouraging the cooperative efforts of the public and private sectors, she initiated changes that were not only cosmetic, but beneficial to the economic health of the city. . . . She frequently visited Washington to testify at hearings concerning cuts in federal aid to cities, demonstrating her conviction that unless this country continues to encourage our cities to prosper, it will be a tragic loss to us all.”