Work of engraver Don Everhart keeps his name in circulation

U.S. Mint sculptor-engraver Don Everhart, a Central York, Pa., High School graduate, created this design for the new Lincoln dollar. Background posts covering other columns by fellow blogger June Lloyd: York County’s connection to the French Quarter and First woman concert sax player had links to York troupe.
Former York countian Don Everhart is yet another native who had gained national fame.
He recently made news for his work in sculpting the front of a congressional gold coin granted to the Dalai Lama.
Everhart is a sculptor/engraver for the U.S. Mint in Philadelphia, and a portfolio of his work is below… . 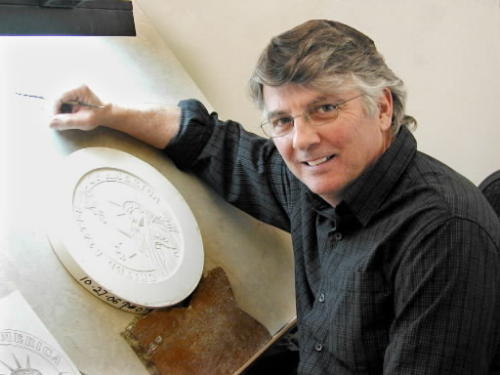 Don Everhart
+++
Interestingly, he’s not the first such artist from York County, as June Lloyd explained in a 2005 column in the York Daily Record/Sunday News:

A recent news article featured Don Everhart II, the native Yorker who was the sculptor and engraver of the obverse (face) of the 2005 Jefferson nickel. He follows in the footsteps of Christian Gobrecht, another York County native who became a well-known engraver at the United States mint.
The seventh child of pioneer German Reformed minister John Christopher Gobrecht and wife Elizabeth, Christian Gobrecht was born in Hanover in 1785, during his father’s 40-year ministry to congregations in York and Lancaster counties. As a child, Christian showed artistic ability, and he was apprenticed at an early age to a clockmaker. He went on to learn engraving and die-sinking (making dies to shape metal). By 1816 Christian was working for Murray, Draper, Fairman & Company, banknote engravers in Philadelphia, producing engravings for bank notes.
Since engraved illustrations for publications were needed in that pre-photography era, Gobrecht also incised portraits of many notables, such as Benjamin Franklin and Benjamin Rush. He fabricated plates and dies for calico printers and book binders, and he designed medals for venerable organizations such as the Franklin Institute. Gobrecht was also a prolific inventor, devising a reed organ, a talking doll, and a camera lucida (a mirrored device that allows the tracing of an image on paper).
At 47, the experienced engraver applied to President James Monroe for a post at the Philadelphia mint. Four years later, in 1836, he was named assistant engraver and die-sinker. He had already provided designs and models for the mint before joining the staff. A short time after his appointment at the mint, Gobrecht devised the well-known Gobrecht dollar. The rare coin, eagerly collected today, is also known as Seated Liberty for the design on the front (obverse) or Flying Eagle for the reverse image.
Before the 1830s, the United States produced relatively few coins. An adequate supply of Spanish coinage was in circulation in America, and precious metal prices were not stable. About the time Christian Gobrecht went to work for the mint, Mexican silver ore became readily available and the mint started using efficient steam-powered coin presses. The U.S. subsequently started producing coins in volume.
The director of the mint, Robert Patterson, called for new coinage designs, requesting that they incorporate an image similar to the Britannica used on British coins. Painter Thomas Sully submitted the obverse design of an elegant Liberty seated on a large rock. She held a pole topped with a liberty cap. Titian Peale rendered a life-like eagle in flight for the reverse. Gobrecht used these sketches to execute the “Gobrecht (silver) dollar” in 1836. The seated Liberty was introduced on smaller denominations of coins in the next several years, ranging from half dimes to half dollars.
Even though Gobrecht’s seated Liberty was used for a long period (until 1892 in some cases) on the front of most coins, the beautiful flying eagle on the reverse had a much shorter tenure. It had not been used on the smaller denominations, and it was replaced on the reverse of the silver dollar with an eagle and shield in 1840. The flying eagle was resurrected for the obverse of a nickel one-cent-piece from 1856 to 1858. These can be affordably obtained today, since more than 42 million were produced.
The seated Liberty and the flying eagle are not the only designs for which Christian Gobrecht is lauded. His classic Liberty head with coronet was used on gold coins from 1838 to 1908, making it, except for the Lincoln penny, the longest-used coinage model in U.S. coin history. The most noteworthy modification of Gobrecht coins was the addition of the motto “In God We Trust” in the 1860s.
Gobrecht died at the relatively young age of 58, but his legacy is the enduring beauty of the patriotic symbols of graceful Liberty and invincible eagle. Today, nearly 170 years after their creation by a York County pastor’s son, they remain highly appreciated and sought-after.