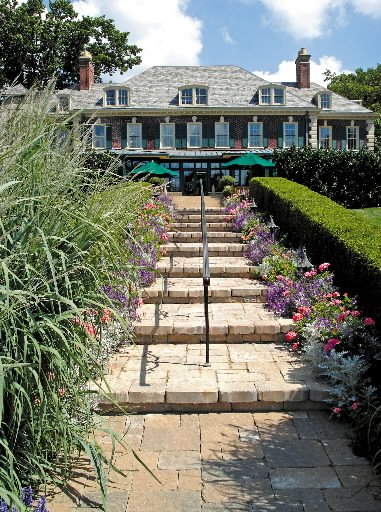 Built in 1929, Box Hill Mansion is one of York County’s most noteworthy nods to the era of Georgian style. It was featured on the cover of Spaces magazine, published by the York Daily Record/Sunday News. The mansion serves as the focal point for the exclusive Regents’ Glen Country Club in Spring Garden Township. (See additional photo below.) Background posts: Glen Rock farm: ‘You can not stay stressed here for long’.

A story in Spaces magazine gives a little-known fact about the Box Hill Mansion, now on the eve of its 80th birthday.
The brick mansion’s walls are solid concrete, designed to control fire, according to the magazine… . 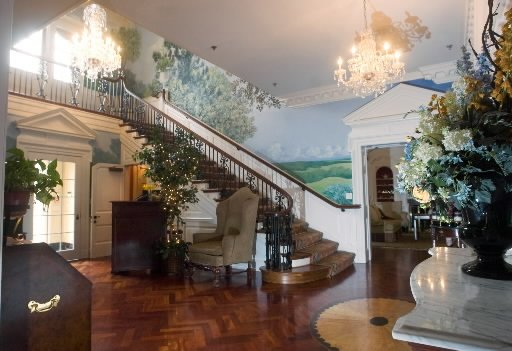 Philadelphia’s Daniel Gluibizzi painted this mural in Box Hill Mansion’s foyer in 1999. From the second level, the mural reflects how the outside garden looks from that vantage point, according to Spaces magazine. Background posts: York County made big, heavy things and was immensely proud of it and Glatfelter, Morgan Smith head industrial legacy list.

George and Purdon Smith Whiteley built the big house. Not only did the family own false teeth maker Dentist Supply Company, Dentsply, but Purdon was a member of the family of S. Morgan Smith, one of York County’s most prominent industrialists.
So when Mrs. Whiteley asked for concrete walls because of her lasting fears from a childhood fire, the Whiteley’s could afford them… .
And the gardens with plants and fixtures imported from Europe.
And the crystal chandelier.
The Spaces story will tell the rest:

The year was 1929.
The Wall Street crash plunged the nation into the Great Depression. Popeye sailed onto comic strip pages. The Academy Awards — and Oscar — were born.
That was also the year George and Purdon Whiteley’s hilltop mansion in Spring Garden Township was completed.
George Whiteley was one of the founding fathers of Dentsply International Inc., a manufacturer of dental supplies based in York.
The Whiteley mansion reflected the couple’s passion for world travel, as well as Purdon’s love of southern architectural design. Built in the Georgian style, the brick structure’s walls are solid concrete to aid in controlling a fire, said Judy Snyder, the executive director of Box Hill, the 21st century transformation of the Whiteley mansion.
“Mrs. Whiteley was in a fire as a child,” Snyder said.
Today, the home where the Whiteleys raised their four children and lived for nearly 50 years is the keystone of Regents’ Glen, a private country club surrounded by upscale homes and condominiums.
Box Hill, still secluded at the end of Copper Beech Drive, is the dining facility for the club’s 483 members. It hosts about 12 to 15 weddings each year, as well as a minimum of three functions a week in its elegant rooms and lush gardens, Snyder said.
The mansion is on 193 acres of wooded property, with koi- and frog-filled ponds, serene alcoves, fountains and breathtaking views.
The mature gardens were developed partly from cuttings of boxwoods and shrubs brought from Europe during the Whiteleys’ many visits there. Purdon Whiteley wanted to see the beauty of their travels from her mansion’s windows.
“It was like bringing Europe to their backyard,” Snyder said.
In addition to the shrubs, other tributes to their travels remain in the gardens. Stones gathered by the Whiteleys from locations around the globe are set in two concrete bases, now on opposite sides of the property, and labeled with their origins: Scotland, Norway, Brazil, Finland, Athens, Naples, France, Spain, Palestine.
Nearby is the rose garden, which is an original part of the Whiteley home. It is surrounded by topiary, statuary and a fountain. During the home’s renovation, arches were added at the end of the garden.
Box Hill’s interior is as distinctive as its exterior.
While it underwent extensive remodeling directed by Aleci-Dodd Architects and Richard D. Poole Inc. Builder to be converted to its current use, the home has kept its grandeur.
Guests entering the mansion through its front door first see the large crystal chandelier that hangs above the spacious foyer. A wrought iron staircase with a wooden banister winds to the second floor.
The living room, with its original molding, has experienced only subtle changes since the Whiteley years. The room’s fireplace — one of four in the home — has been converted to gas. The solarium, next to the living room, still holds the remnants of what was once a working fountain, Snyder said.
Nearby, an enclosed terrace was added for additional dining space. The room had originally been part of an open deck area and patio, Snyder said. Bright and airy, it overlooks a stone patio, the gardens and ponds.
The library — with two walls lined with books — can be entered from the foyer or the terrace. The wood paneling is the original, she said. Also original to the home is the railing on the staircase to the second floor.
The rooms on the second floor that once served as the Whiteleys’ bedrooms are warmly decorated and can now be used for meetings, card games or for final preparations for weddings.
George Whiteley’s study is adjacent to what was the master bedroom. Little has changed there, Snyder said, although its wood paneling was stripped and fabric panels added to give softness.
The room faces the wooded gardens. And it was from those windows that George Whiteley, according to rumor, occasionally shot squirrels as they scampered below. He then directed staff to retrieve the animals, Snyder said.
Downstairs, what was once a basement with a dirt floor has been converted into a formal English pub that seems perfect for sipping brandy or smoking a cigar. 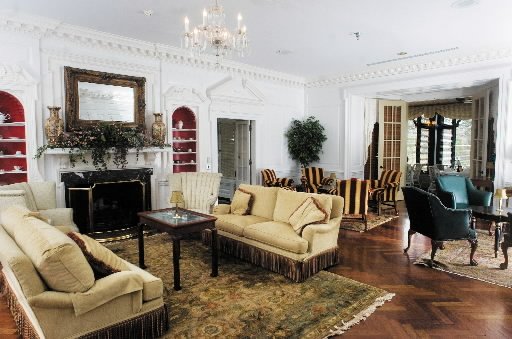