Women’s Club of York: ‘No one knew it really looked like this’ 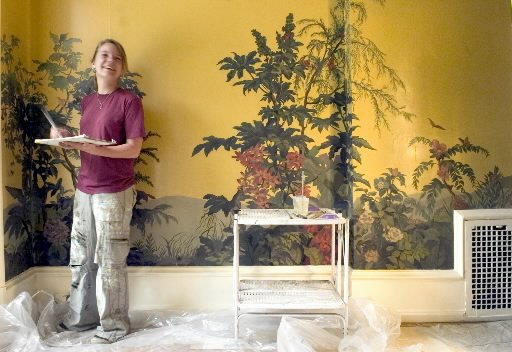 The last York Town Square visit to the Women’s Club of York building told about its owners’ plans to renovate the fire-damaged structure.
The owners have nicely tackled some of the main public areas, as the following story from “Spaces” indicates: 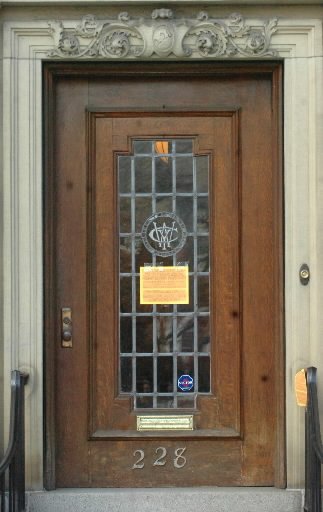 The front door to the Women’s Club is a familiar sight. Walk through, and toward the back of the club, visitors will find that the auditorium, equipped with perfect acoustics, has been restored.

The Woman’s Club of York is filled with antiques and architectural elements from the Victorian era.
Hand-painted silk wallpaper lines one room, and in others, Victorian paintings hang near furniture from the time period.
Last year, a fire threatened to turn the history into ashes.
The East Market Street building, constructed in 1880, was originally a single-family home. In 1917, the Woman’s Club of York, a group of wives of prominent local men, raised money to purchase it.
The club remained its owner until 2005 when rising costs forced them to sell. Jennifer and Eric Salzano purchased the building, promising to save its history and allow the club to continue using it.
In April 2007, an electrical fire started in the back of the building and destroyed the stage and dressing room area.
A double-layer brick wall, built when the Woman’s Club expanded years ago, prevented flames from spreading farther into the building. The owners said it was almost as if the women who went before them were keeping a watchful eye out.
“It’s almost like they were making sure everything was OK,” Jennifer Salzano said.
But smoke billowed through the entire three-story structure, she said. Everything from floor to ceiling was covered in black soot.
The owners immediately started the restoration process.
Doors to the front room were closed when the fire broke out, sparing the hand-painted French wallpaper from too much damage. With cleaning and repainting by local artist Othmar Carli, the tropical design, popular in the early 20th century, burst from the walls again.
In the same room, a Philadelphia-style sofa with claw feet rests near a refractory mirror that reflects the Victorian style. Much of the furniture was purchased by the club, though the Salzanos have added a few of their own touches, such as bronze French sconces in the front hallway.
The auditorium, which was added by the club in 1918, required complete renovation. Eric Salzano was able to grab the two 19th-century paintings before flames could reach them, but smoke and soot took a toll on the room.
The walls were repainted shades of cream and terra cotta to accent the architectural elements. The color scheme continues in large medallions gracing the ceiling. The ornate pieces were once used for ventilation but now provide a place for stained-glass lights to hang.
Hardwood floors were stripped and restored throughout the building. The owners were amazed to see the auditorium floor, darkened with age, turn a lighter shade.
“No one knew it really looked like this,” Salzano said.
The room, originally used for musical events, still offers perfect acoustics, Salzano said. It is still regularly used for recitals.
The stage took the brunt of the damage, but it was rebuilt. Double doors leading to a backstage room were salvaged and repaired. The owners added a second-floor room to serve as a meeting room or an extra place for events.
The Salzanos are beginning restoration work on the upper floors. They hope the building will be used in the future for weddings and other community events.

For scores of posts on women’s history in York County, see this blog’s Women’s History category.
For more on Othmar Carli, visit: Othmar Carli: ‘Restoration is much better than selling shoes to make a living’