This York, Pa., Daily Record/Sunday News photos shows York County’s newest celebrity, thoroughbred Smarty Jones of Preakness and Kentucky Derby fame. The story Smarty Jones’ star power draws a crowd in York County gives this insight from a child about the champ at an open house at Windsor Township’s Ghost Ridge Farm over the weekend: ‘Daddy, that’s bigger than a giraffe.’ The Daily Record/Sunday News reported that the horse was born in 2001 at Someday Farm in Chester County and named for owner Patricia Chapman’s mother, who went by that nickname. The $7.6 million career winner is a fourth-generation descendant of Secretariat. He lost only one race in his nine-race career, the Belmont Stakes, losing his bid for a Triple Crown. (See another photo of Smarty Jones below.) Also of interest: Glen Rock hilltop farm: ‘You cannot stay stressed here for long’ and Wiki profiles eight with national status bearing Hanover roots and Hames made in Shrewsbury Township’s Hametown fueled early American horsepower and Two ornate mansions that Hanover Shoe built.

Being in the tail end of the baby boomers I am probably among one of the last generations to have frequented Avalong’s. It was a big deal to have a “car hop” bring your meal out to the car. For me, if it wasn’t broasted chicken it was the pulled pork sandwiches with sweet pickle relish. I have never found one to come close to it.
My parents had a restaurant in the 70’s but we’d sneak away every now and then to go there. It was a fun place to be.

Recommended video: The Gettysburg Address recited by: David McCullough, Ken Burns, Sam Waterston, Matthew Broderick, Stephen Lang and Medal of Honor recipient Paul W. Bucha. According to an e-mail: The musical score is provided by Oscar-winning composer John Williams. The video was created in opposition to a proposed casino near the Gettysburg National Military Park. All celebs, crew, editors, and musicians volunteered for No Casino Gettysburg.
Blog post of the day: Yorkblogger Joan Concilio writes about the thrill of meeting one of her virtual friends at Something that was Only in York County for a limited time. I second the thrill of meeting for the first time someone who regularly comments on this blog or e-mails interesting stories. Virtual is fine, but there’s nothing like actually meeting the person. If you’re ever out where I’m speaking, make yourself known to me.
Forum topic of the day, The Exchange: Readers are trying to ID a local artist.. 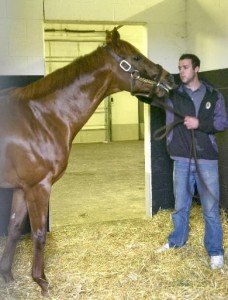 Smarty Jones gets ready for a walk on York County soil.