When a Pullman automobile became a seesaw 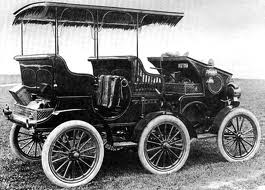 There was a day, a little more than 100 years ago, that a strange-looking conveyance motored along York’s streets.
Strange because it was self-propelled, an automobile. Strange because it had six wheels, although the American automotive industry was so new that it probably wasn’t the number of wheels that caused heads to turn.

I mentioned the six-wheel Pullman automobiles here because the building where the 12,000 to 20,000 Pullmans made in York represents another attraction in the new stadium area of York. (For a sampling of other sites, see my York Sunday News column: ‘A walking tour of the historic stadium area’). The North George Street building is marked with a painted sign on its side.
The six-wheeler’s life was short… .

The middle wheels powered the vehicle so when the center tires hit a high spot, the car seesawed from front to back. (None are known to exist today.)
The Pullmans were the best-known of about 15 county companies making vehicles as businesses in the crossroads community of York converted from wagon making to auto making.
The local auto makers gave way to those in the Midwest by the World War I era.
Pullman’s, named after the maker of railroad coaches, closed in 1917. Changing to four wheels did not ensure the company’s success.
But the six-wheeled car added another story to York’s lore: One crashed into a telegraph pole on York’s South George Street. The impact threw William Mitzell, an occupant, against the vehicle’s front. The crash stunned Mitzell, but he was not injured.
For additional walking tour information on York, check out:
·Scott Butcher’s “Civil War Walking Tour of York, Pennsylvania”
·Lila Fourhman-Shaull’s “A Walking Tour of Civil War-Era Residents at Prospect Hill Cemetery, York, Pa.”
These booklets are available at York County Heritage Trust, 250 E. Market St., York.
· For a guide to the murals, go to The Murals of York.