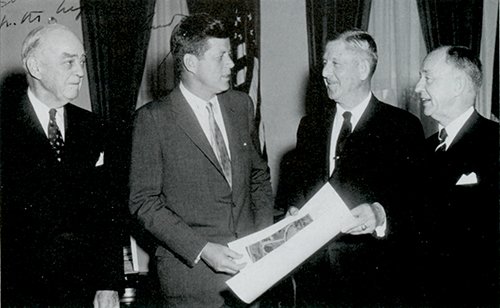 Gen. Jacob L. Devers met with President John F. Kennedy about his work as chair of the Battle Monuments Commission, one of Devers’ assignments after retirement from the military in addition to creating the U.S. Army Field Band. Devers was impressed with Kennedy’s astute questions after Devers submitted his final report and showed his prickly relationship with Ike Eisenhower. “Now Eisenhower, if you’d gone in there under the same conditions, he’d have done all the talking and he never would have found out what you came in for,” Devers told an interviewer. (York County Heritage Trust photo). Background posts: Gettysburg’s Ike and Manchester’s Henry and York native Jacob L. Devers’ name still in service at Fort Knox, Ky.

History came together at Farquhar Park on Sunday.
The U.S. Army Field Band played at the landmark bandstand in the landmark park.
Gen. Jacob L. Devers of York is sometimes called “the father of the band,” according to Michael Markey’s book “Jake, The General From West York Avenue.”
And Jakie Devers grew up not far from Farquhar Park, on what is now known as Roosevelt Avenue.
Markey explains that Devers in the post-war period contacted military conductor Chester Whiting to direct a new musical unit that would act as a public relations vehicle for the Army… .

Whiting accepted the proposal, and Devers authorized the U.S. Army Field Band on March 21, 1946.
It took a four-star general to pull this off at a time that the Army was downsizing.
Whiting’s orders from Devers: “I want you to organize a band that will carry into the grass roots of our country the story of our magnificent Army, its glorious traditions and achievements, and of the great symbol of American manhood, the ground soldier.”