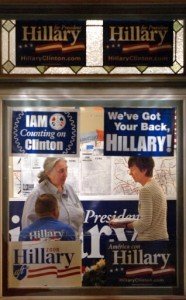 Democrat Hillary Clinton won Pennsylvania and York County by about the same 55-45 percent margin in last week’s primary. Her York, Pa., headquarters, seen here, were bustling prior to the primary. How she or Barack Obama would fare against John McCain in York County will be a matter of much discussion in upcoming months. Background posts:People still remember Hillary Clinton’s visit to York County, Historians, journalists draw on work of forebears and York County historical community to miss Carl Hatch.

A critic of my York Sunday News column “York County: A model of moderation” wrote, “Dig a little deeper, and enough of the Rah, Rah York crap already!” … .

Well, to be clear, York, indeed, has some deep problems concerning race and poverty.
But there’s a third way to look at York, as I laid out in the column.
The third way falls between those who contend that York’s conservatism has fueled its hate-filled citizenry and those who believe that liberals’ talk of hate and race and extremism are overrated and stalls community progress.
For those seeking to understand what makes York County tick, the county’s historic voting patterns are something to consider, although just a piece of the puzzle.
Here’s the column, gleaned from past blog posts, for you to consider:

Varying messages from the various pundits make your head hurt.
Barack Obama can’t get the white vote.
Women will vote for Hillary Clinton but men won’t.
And what does Clinton’s 55 percent to 45 percent win in York County, about the same as elsewhere in Pennsylvania, say about voters around here?
Where does one start with that?
A model, put forth in 1972, about York County voters in presidential elections is one tool to apply to local voting patterns.
In 1972, York College professors G.A. Mellander and Carl E. Hatch looked at local presidential voting patterns from 1860 to 1968. They concluded:
— York countians vote against presidential candidates who are inordinately idealistic and not practical.
— Local voters back presidential candidates who strike a happy medium between the extremes of too much laissez-faireism and too much federal intervention into local affairs.
“All of which explodes the myth that York County is a region of rock-ribbed conservatism and reactionaryism,” their study concludes. “On the contrary, voting statistics over the years show that York County has been a consistently moderate political unit.”
That’s a bit of a contrarian view to those who believe York County is part of Alabama.
The professors point to numerous examples to match their model of moderate York County voting. Their Exhibit A would be the 1964 election when Barry Goldwater, viewed as an extreme Republican, was trounced by the less dogmatic Lyndon Johnson.
Applying this model to last week’s primary, one could contend that Clinton did a better job of seizing the middle in the minds of local voters.
And county voters might have seen relative newcomer Barack Obama as overly idealistic. The better-known Clinton might have received props from certain practical results of her husband’s presidency – particularly his handling of the economy.
Mellander’s and Hatch’s study goes only through 1968, and the county has voted consistently Republican since then. But the two times Democratic candidates have been the closest – Jimmy Carter in 1976 and Bill Clinton in 1996 – they were viewed as somewhat moderate. And York County’s two congressmen for that stretch – Bill Goodling and Todd Platts – are largely viewed as moderate.
The study deals with elections covering both parties, not primaries. But primary or election, Democratic voters are still York countians.
The academicians’ work is intriguing because it runs against common thinking that places York countians somewhere to the right of Alabama’s George Wallace.
Well, Wallace had his chance with local voters in 1968, but they rejected his third-party candidacy as extreme. His 7,884 votes fell a distant third to Richard Nixon’s 50,148 and Hubert Humphrey’s 32,636.
How would the professors’ model apply to a local fall election between centrist Republican John McCain running against either Clinton or Obama? Moderate McCain – no Goldwater or Wallace – would suggest a tough candidate for the Dems locally.
But, it’s a long time until November. Just stock up on aspirin.
HOW NIXON WON
York County solidly backed Republican Richard M. Nixon over eventual national winner John F. Kennedy in 1960, with the local tally coming in at 55,109 to 38,710.
That came after Kennedy made a hit with his York Fair visit just before the election. JFK won the nationally televised debate, the event some say was decided by Nixon’s 5 o’clock shadow and choice of a gray suit on black-and-white TV.
So why the Nixon win in York County?
Democrats could win the presidential vote in the county, historically a Democratic enclave. The county backed Franklin D. Roosevelt in his four campaigns. In 1948, Dem Harry S. Truman beat Thomas Dewey, 33,110 to 32,501, in York County. And in 1964, Democrat Lyndon B. Johnson trounced Barry Goldwater, 57,366 to 32,846.
Veteran newsman Harry McLaughlin, reporting on Kennedy’s York Fair visit, conjectured that many in the York community were concerned about JFK’s Catholicism. Further, Nixon’s parents had lived for years in Menges Mills, outside Spring Grove.
In a study of presidential voting patterns, York College’s G.A. Mellander and Carl E. Hatch concluded that Yorkers voted for a “moderate” Nixon instead of Kennedy, viewed as a federal interventionist.
They compared the 1960 election to the 1968 contest between Nixon in the middle, George Wallace on the right and Hubert Humphrey on the left. Nixon easily won the local election.
The 1960 election wouldn’t be the first or last time that York countians favored the losing candidate in national voting.
One hundred years before, York County voters rejected Abraham Lincoln in favor of his Democratic opponents.
In 1864, too.