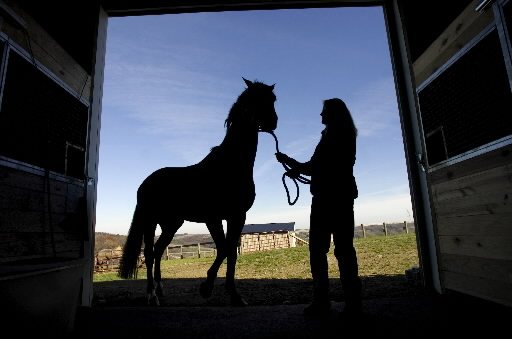 Ginger Parker is a different type of York County barn owner. She uses her barn, located on a high point near Glen Rock, to breed show horses. Here, her is the inside-out view of Parker in the barnyard. Background posts: Star Barn’s relocation a plus, even if not in York County and ‘An old bank barn with so much character’.

Hanover Shoe Farms put horse breeding on the map in York County.
Most recently, Donato Hanover, then stabled at his birthplace in Hanover, won harness racing’s 2007 Horse of the Year honors.
And it was 16 years go that Pin Oak Lane Farm in Shrewsbury Township gained the national spotlight as birthplace of Lil E. Tee. That colt was the first Pennsylvania-bred horse to win the Kentucky Derby… .

In 2004, York County ranked third in the state behind Chester and Lancaster counties for having the largest number of racehorses – about 3,000, according to Penn State a Penn State researcher.
You don’t have a racetrack in the county,” the researcher said at that time. “It’s a bedroom community for those who do.”
But there’s more to horse breeding than racehorses… .
Ginger Parker operates a small show horse farm in southern York County.
Here’s a “Spaces” magazine article (February 2008) on her farm, operating out of a showcase barn with a view of the hills around Glen Rock:

When people want to find Ginger Parker, they don’t knock on her
front door first.
Instead, they walk the short gravel path to the barn that sits
adjacent to her home on Flower Farm in Glen Rock, York County. They
know that’s where to find her.
The barn sits atop Parker’s 51-acre property, which she believes is
the highest point in Glen Rock.
She runs the farm in partnership with her mom, Virginia Craley. A
lawyer by training, Parker now makes her living breeding show horses.
It’s rare to catch her longing for a law office.
Stand in the barn, slide open the massive doors on all four sides
and take in the view of rolling hills, fields and homes below. It’s
easy to see why it’s her favorite spot.
It’s the light, the openness, the way the outside comes indoors, she
said. From there, she can watch her kids play and her horses run and
buck.
The barn is Parker’s first stop of the day at 6:30 a.m. when she
feeds the 20 or so horses that call it home. It’s quiet other than
the occasional snort, whinny or stamping hoof from one of its residents.
“You cannot stay stressed here for long,” Parker said. Even horses
that arrive bucking and biting appear happy and relaxed weeks later.
The wood structure covered with steel siding has been the location
of many milestones.
Foals have been born there. Horses have been groomed and put through
hard training sessions. When the work pays off, the barn is a spot
for celebrations. There has been laughter, and there have been tears.
There, Parker is reminded that life is good.
Vinca, a Dutch warmblood stallion, has been internationally
recognized for his breeding and won numerous awards. Several other
horses have been named champions at various shows.
The barn is beautiful, but it’s designed for serious business, too.
Parker isn’t just a horse lover, she insists. She’s all about
breeding quality show horses.
The exterior of the barn was built by an Amish builder, Parker said.
She hired a friend and craftsman, Donald Ibex, to built the interior
to her specifics — the larger-than-normal stall space makes it easy
for Parker to load items in and out or drive a tractor in between. It
has amenities that make taking care of the horses easier, such as a
separate room to keep feed, another to groom the horses and a hot-and-
cold-water bath stall.
In Parker’s eyes, it’s not so much the physical structure as the
aura of the barn that makes it special.
There, she feels happy, peaceful, comfortable.
“It just feels like it takes care of you,” she said.