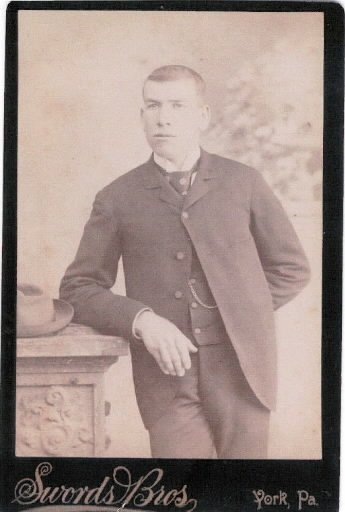 Powwow practitioner and murder victim Nelson Rehmeyer is seen here in this photograph from Ross McGinnis’ ‘Trials of Hex.’ See photograph of his wife and daughters below. Background posts: ‘We would ‘hex’ them if they ignored us’ and How powwow doctors plied their craft.

Why is it that invaders of Nelson Rehmeyer’s house come in threes?

At Thanksgiving time in 1928, Rehmeyer was murdered by two young men and a boy who were trying to break a spell they believe the victim, a suspected witch, had cast on them.

Now, Rick Ebaugh, descendant of the victim of the famous Hex murder, reports two men and a woman broke into the Rehmeyer house and wandered around… .

From the looks of their expressions captured on a security video, two men and a woman wandered aimlessly in the dark inside the farmhouse of the infamous Hex murder site in North Hopewell Township.
From the time they stepped on the porch to when one of them threw a broken mailbox through a front window to get inside, the three are seen wandering though the vacant farmhouse on Rehmeyer’s Hollow Road, said Rick Ebaugh, who owns the property and is the great-grandson of Nelson D. Rehmeyer.
For years, Ebaugh and his partner, Jerry Duncan, have been trying to open a historic museum to tell the story of the 1928 Rehmeyer hex murder, which has become legendary and, in its day, an international sensation.
“I was afraid sooner or later people’s curiosity would get the best of them. I had a feeling something like this was going to happen,” Ebaugh said.
Based on a review of a security tape and witness accounts, Ebaugh said, three people drove by the home about 10 p.m. Wednesday. Then, about 2:30 a.m., a man who appeared to be in his late 30s broke a window with a mailbox he tore from the ground. Then, for six minutes beginning at 3:07 a.m., he and a man and woman, who appeared to be in their 20s, wandered through the dark house using flashlights.
They caused no damage other than to the window but took a prop used to tell the Hex murder story. Ebaugh declined to say what the prop was, fearing it might hinder the investigation.
“It’s a shame. We are trying to get this place open and something like this happens,” Ebaugh said.
Ebaugh said he filed a complaint with North Hopewell Township Police. He plans to turn the video over as part of the investigation. He has offered a $200 reward. And he plans to press charges.
Township police could not be reached for comment.
Ebaugh said the intruders can be clearly seen thanks to several hidden security cameras.
“It’s all on video — everything,” Ebaugh said.
Ebaugh and Duncan have been restoring the farmhouse to look like it did at the time of the Nov. 27, 1928, murder.
The way the story goes, Rehmeyer, a reclusive farmer, practiced powwow, a form of folk healing and magic. Two men and a boy believed he placed a hex, or magic spell, on them. They confronted Rehmeyer and ended up beating him to death.
Ebaugh said he is trying to come up with a new plan to convince North Hopewell Township officials to allow the museum to open. Last August, the township’s zoning board rejected their application to open the house as a public historical site.
“We are trying to get the house open. This may not have happened if we were open,” he said.
Duncan said he was a bit disheartened about the break-in but is thankful the place was not “trashed.” He said that he hopes this was just a matter of people’s curiosity getting the better of them and not some effort to damage a piece of history.

For previous blog posts with extensive photographs about the Rehmeyer Hollow house, see: