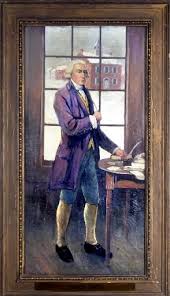 James Smith
A proponent for additional statues in York recently backed James Smith as a candidate. (See who’s your candidate for York’s next statue?)
After all, he argued, York’s most prominent 18th-century lawyer signed America’s top three seminal documents: the Declaration of Independence, Articles of Confederation, U.S. Constitution.
That’s not quite correct, as this Q &A suggests: …

Q. What did James Smith, the noted York County lawyer, sign?
A. He inked his name to the Declaration of Independence and Pennsylvania’s Constitution of 1776. Those accomplishments, by themselves, should earn him a statue.
Q. As a delegate to the Continental Congress, didn’t he sign the Articles in York?
A. No, he was not a delegate at the time the Articles were adopted in York in November 1777. He was also not a delegate at the time the ratification process started in July 1778, after Congress had returned to Philadelphia.
Q. What Pennsylvanians signed the Articles?
A. Robert Morris, Daniel Roberdeau, Jonathan Bayard Smith, William Clingan, Joseph Reed.
Q. But didn’t Smith sign the U.S. Constitution?
A. By the late 1780s, Smith was an elderly York attorney. He wasn’t part of the Constitutional Convention.
Q. Who signed the Constitution from Pennsylvania?
A. Benjamin Franklin, Thomas Mifflin, Robert Morris, George Clymer, Thomas FitzSimons, Jared Ingersoll, James Wilson, Gouverneur Morris.
Q. Did anyone sign all the important American documents?
A. Definitions vary about the top four such treatises. If that list includes the Articles of Association, Declaration of Independence, Articles of Confederation and U.S. Constitution, Connecticut’s Roger Sherman inked his name to these foundational documents. Sherman spent some time in York County during Congress’ nine-month sojourn west of the Susquehanna.
Photography courtesy of York County Heritage Trust