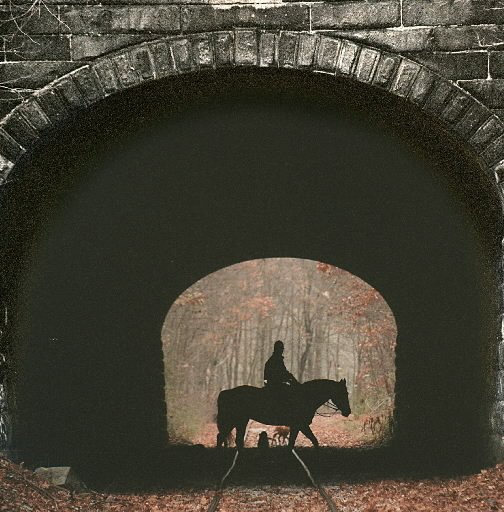 Bob Kinsley rides Mexican Wave through the Howard Tunnel on the Rail Trail. The tunnel is one of the oldest in the United States.

No matter which direction York County rail trails run, users probably won’t see any artifact or remnant of the past more imposing or memorable than the Howard Tunnel on the mother trail from the Maryland Line to York.
The tunnel was constructed in 1836-1837 through a hillside between Glatfelter’s and Brillhart stations. Trains used the hole in the hill to reach York for the first time in 1838. After trains reached York, that started a flow of raw materials to the port of Baltimore and other destinations in the South… .

Over the years, a second track has been laid through the tunnel. It’s floor has been lowered to provide more clearance. It received a brick interior facing. Even a step off area has been gated since the rail trail was opened in 1999 to prevent pranksters from scaring users.
But the 370-foot-or-so tunnel brings you back to another time.
It’s relatively unknown, except for trail users, because it had never been particularly accessible before the trail opened. You had to reach it by foot or train.
One more thing: The tunnel is reportedly named after a railroad investor, Revolutionary War Colonel and politician John Eager Howard of Baltimore.
And one more thing: The tunnel, or land near its northern portal, was the site of an old picnic ground. The nearby Codorus Creek branch offered an attraction, as did the tunnel. So, this unsung landmark has been used for recreational purposes before. (For additional posts on often overlooked county landmarks, search for “unsung” in this blog’s archives.)