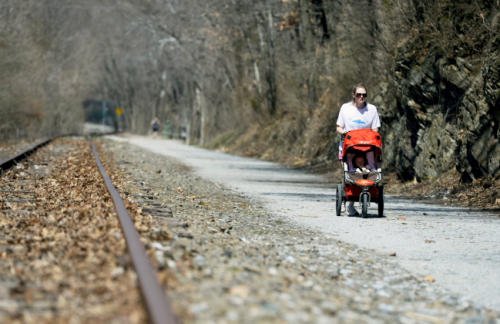 The portion of the York County Heritage Rail Trail north of the Brillhart Station parking area is ideal for both hikers and bikers. Also of interest: Check out these photos of the rail trail extension, north of York.
A major movement is spreading across York and Adams counties.
Old railroad and trolley rights of way as well as an old canal footpath are being converted into rail trails – a major recycling program.
The Heritage Rail Trail County Park is the most prominent, but here are some other extensions or separate trails inventoried in a recent York Weekly Record story:

– Part of the northern extension of the county rail trail opened recently. It will eventually run from Lafayette Plaza in York where the Maryland to York trail now ends to John Rudy Park, partly following the path of the former Codorus Navigation. That 1830s to 1840s canal system made the Codorus Creek navigable.
– That northern extension some day might follow the Codorus Creek in the other direction to where it flows into the Susquehanna River.
– The old trolley line right of way that ran between York and Hanover, originally opening in 1908, will be the site of yet another hiking and biking trail. This one would be 16.5 miles in length.
– A trail following the old Hanover Branch railroad to Gettysburg is under study. “This trail would be part of the Grand History Loop Trail, a network that would lead south from Gettysburg through Emmitsburg and Frederick, Md., and hook up with the C&O Canal Trail, which leads to Washington, D.C. From that point, trail users could travel the Washington, Baltimore and Annapolis Recreational Trail and the Northern Central Rail Trail to the Mason-Dixon Line, where it connects with the Heritage Rail Trail County Park and then take the final loop back to Hanover by way of the York-Hanover Trolley Trail,” the Weekly Record story states.
– The Red Lion Mile, to be completed before year’s end, will run along the Ma and Pa rail line and connects residents to Red Lion’s downtown business district.
– Seven municipalities along the Ma and Pa line, are studying an 8-mile-long trail from Red Lion to the outskirts of Felton.
– Plans for the Hollow Creek Greenway in parts of Springfield Township and Loganville have been completed. The first section of the Greenway will run from Valley Road, near the entrance to Nixon Park, and continue to the Loganville borough line. Later, it will run farther into Loganville.
These trails will give riders and walkers many of the views enjoyed by train and trolley riders 100 years ago.