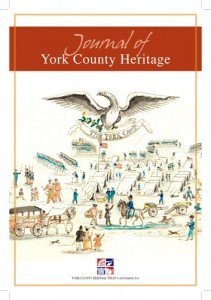 The cover image and story in the 2011 scholarly journal  ties in the 150th anniversary of the start of the Civil War.

And who else would write the piece other than Scott L. Mingus Sr., by day a scientist with Glatfelter and the other 16 hours (well, something like that) he researches and writes about the Civil War.

Here’s a summary of his piece in the York County Heritage Trust publication.

About: This piece provides background about Lewis Miller’s scene of the 87th Pennsylvania in camp, probably at Penn Park, before units from the regiment departed to guard bridges against Southern saboteurs in northern Maryland. This cover image and story ties the journal into the 150th anniversary of the start of the Civil War.

Quotable: “Residents lavished attention on the soldiers, who often marched off to war through a ‘perfect storm of flowers’ tossed by the admiring crowds.”

Interesting point: Notice the civilian/soldier interaction in Miller’s drawing, including the arrival of the bread wagon and peddlers hawking their wares to the soldiers.

– Check out this list of York County, Pa.’s 10 most memorable Civil War moments.

The journal is available at the York County Heritage Trust, 250 E. Market St., for $6.95. The new journal and the initial 2010 publication are available for $10.