9 recent books demonstrate York County has much history to explore, and researchers are digging into it 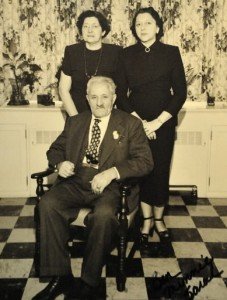 Lewis Lavetan is seen with his sisters Minnie and Sarah in 1953. Lewis was first board president of the York, Pa., Jewish Community Center, serving from 1925-1929 and again from 1949-1956 and his descendants remain active in the JCC. The JCC produced a book “Celebrating 100 Years: York Jewish Community Center” in connection with the anniversary.  The York County Heritage Trust recognized that book recently along with other publications about York County history. Also of interest: Chai Road Tour provides insight into Jewish life in Downtown York.
With the recent unveiling of the 2011 Journal of York County Heritage came the roll call of local history publications published recently.

The York County Heritage Trust’s count of originally published books, or those released with major revisions, between January 2010 and August 2011 came in at nine.

Seems to me that this is an impressive number, something many communities would envy. It underscores fact that many in York County love and appreciate their history.

If any  publications are missing here, please comment below of contact Trust archivist Lila Fourhman-Shaull. Many of these publications are available at the Trust’s bookstore of the York County Library System.