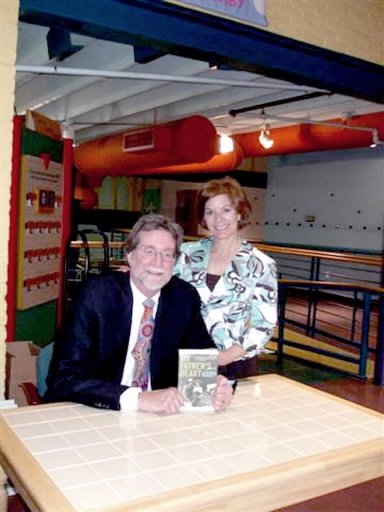 Steve McKee’s “My Father’s Heart, A Son’s Story” is a multi-faceted book that is more than a memoir about heart disease. It explores the complex relationship between father and son and the painful aftermath of a loved one’s death. And it’s a story about growing up in the York area in the 1960s. Author Steve McKee, a York Catholic graduate, is seen with Susan P. Byrnes at a signing of his book. Background posts: East Yorker David Levin became exemplary elder and Upcoming events should attract York/Adams history buffs.

I had the good fortune of reading part of “My Father’s Heart” manuscript, specifically the sections that touch on York and its history.
Author Steve McKee and I have a lot in common. Pretty much the same age. Grew up in the same years. Both newsmen. Steve is an editor at the Wall Street Journal.
In reading the manuscript, I thought how this work mirrors a chapter in David Levin’s “Exemplary Elders,” a story about growing up in the 1920s and 1930s. Levin thrived as a Jewish boy in Lutheran old East York. About three decades later, McKee moved to nearby Haines Acres, a Roman Catholic outsider in a Protestant community… . 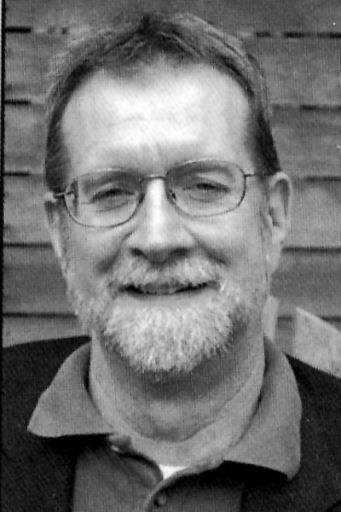 Steve McKee
In each case, their differences sharpened their perceptions. Similarly, each embraced a warm view of a York that is sometimes criticized as cliquish and reserved.
I thought before reading McKee’s work, and believe more strongly now that I’ve read the whole book, that “My Father’s Heart,” with all its wonderful contributions on the health front, gives York countians a fresh outside-in glimpse of their own community from an astute observer who writes from the inside-out.
Here is my column on the book, to run in the York Sunday News (2/17/08):
“Now it was morning. Mom had pulled the Cutlass into the driveway, and it was time to go back into our house.
“The place was immaculate, clean from top to bottom .¤.¤. .
“On closer inspection — I looked, wandering around the house — it was obvious the vacuum had been run. Not just in the TV room but the living and dining rooms as well. I could see the tracks. In the kitchen, any stray dishes Mom hadn’t gotten to last night were washed, dried and put away.
“Then I looked in the refrigerator. It was packed .¤.¤. .
“That prompted me to open the cupboards. Filled.
“We never learned who did this .¤.¤. . ”
“Mom never found out and she never asked. She already knew the answer: the York Crowd.”

Steve McKee’s “My Father’s Heart,” from which this excerpt came, is a book that does a lot of things, everything well.
It informs about heart disease and how it runs in families and provides counsel for wellness.
It’s a son’s extraordinary quest in trying to understand a complex father.
It’s an ordinary story about a typical suburban family.
And it’s a memoir of growing up in York in the 1960s. It explores life in Haines Acres, showing a close-knit neighborhood. McKee’s work touches on moments fishing at Muddy Creek and eating at Gino’s and acquaints the reader with legendary York Catholic basketball coach Jim Forjan and the admired Cole Steel veep Otto Lewin.
In 320 pages.

John McKee worked at Cole Steel from 1954 to 1969, part of York County’s post-war expansion. The McKee foursome — John and Helen McKee, daughter, Kathy, and son, Steve, came from New York, part of the out-of-town throng then marching into a burgeoning county.
Steve McKee writes about his father’s consuming job. That grueling inventory in early July, then easy camping in August.
He writes about temporary housing in Dover and then the move to Stony Brook. The family settled in a Haines Acres’ house with a single-car garage, powder room off the foyer and a separate TV room. The living room was reserved for company.
He writes about his father’s first heart attack in 1963 and his unwillingness to quit smoking and otherwise take care of himself thereafter.
This culminated in a moment on Sept. 30, 1969, that changed Steve McKee’s life.

That evening, he and his father were watching “Marcus Welby, M.D.,” in the TV room.
“I heard it,” McKee wrote, “before I saw it.”
He caught the sound of air being pulled between his father’s clenched teeth.
His father was suffering a second heart attack.
And a frantic 16-year-old Steve McKee watched his father die.

The author and his mom spent that sad night at the Philbins, “their house at the top of Haines Acres with the picture window overlooking all of York.”
It was on their return home the next day that we pick up the story about Steve and his mother pulling up to the house in their Cutlass.
And here we perhaps come to the book’s main calling.
His family never confirmed who cleaned up after John McKee’s wrenching death, other than that it no doubt was the York Crowd.
They never had an opportunity to say thank you to the Philbins, Flicks, Baulers, Mastersons, Schmitts, Kirks, Leahys, Ochs, McEntees, Kosevics and scores of others who helped shape their lives, who made — and make — York a place that has never lost its sense of community.
“My Father’s Heart” does a lot of things, everything well.
But it does another thing.
It’s Steve McKee’s chance to say thank you to the York Crowd — and York — from the bottom of his heart.