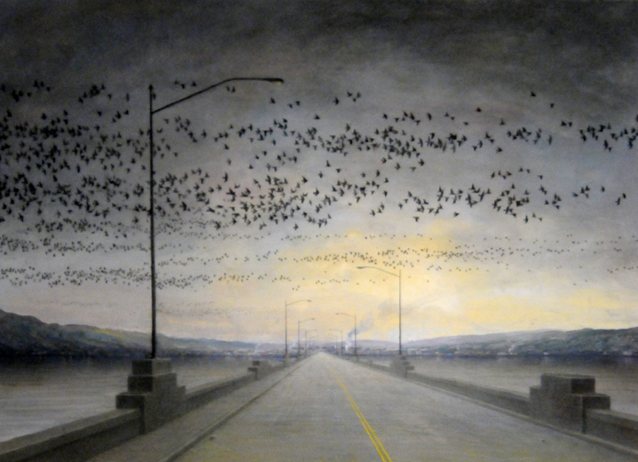 ‘Migration’ (1997) by Hellam Township, Pa., artist Rob Evans is part of the ‘Visions of the Susquehanna, an exhibit of 250 years of paintings by American Masters,’ on display at York College through Wednesday, Feb. 20. Several works in the exhibit, for which Evans served as curator, capture the Susquehanna River as it divides York and Lancaster counties. Background posts: Susquehanna River bridge makeover flowing along, Almost … a double deck bridge across the Susquehanna? and When did Wrightsville Ferry service end?

The “Visions of the Susquehanna River” exhibit, in its final days at York College, shows the beautiful river from a number of vantage points.
But the paintings, as the saying goes, are more than a bunch of pretty pictures… . 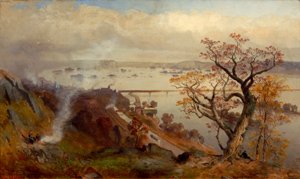 Lloyd Mifflin painted ‘The Susquehanna River from the Hills’ (1913). The painting is part of the collection of The State Museum in Harrisburg.
A label in the two-room exhibit, which closes Wednesday, gets it right: Nearly every image shows the intertwining of humanity with nature.
For example, at least one painting shows five forms of transportation linked with the river: roads for pedestrian and wagon travel, railroads, canals and the river itself.
And three or more paintings contrast the serenity of the river against smoke rising from factory stacks on its banks.
What is neatest is a painting by York County artist Rob Evans (above).
It shows a river bridge going east/west, heading toward a distant town with working factories. Meanwhile, birds fly north/south following the river and above the bridge.
Interesting symmetry.
The label provides an apt summary of this must-see exhibit:
“While it be in the form of cows, figures, bridges or factories, civilization is ever present, while nature survives in the form of trees, wild birds, and fish and the eternal flow of the Susquehanna River.”
The exhibit opens at 9 a.m. weekdays and noon on Saturday and Sunday at the art gallery at Wolf Hall. 815-1380