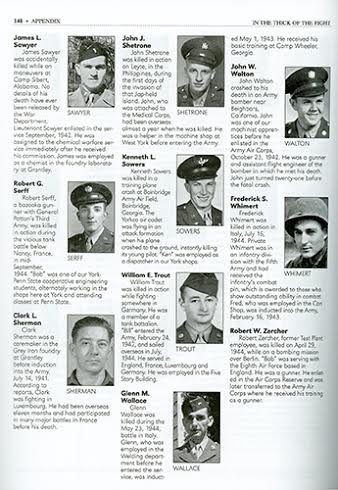 This page from “In the Thick of the Fight,” profiles several of the 25 York Corporation employees who died in uniform in World War II, according to “Shop News,” Yorkco’s newsletter. A researcher has shared additional information on the death of Robert Zercher, alphabetically last on the list of those who died. Background posts: Book blast produced Mother Lode and Dealing with POW camp, loss of life among York County’s WW II sacrifices.

“I know from my research, most of the time, the story of what happened doesn’t end when they were shot down, it is only the beginning.”

So says ace researcher Jim Marsteller, expert on the 392nd Bomb Group.
Marsteller, jimbob@cyberia.com, also noted that more US servicemen died in the Air Corps than the Marine Corps. And while completing the required 30 missions, the chance of being killed was 71 percent.
He noticed a short profile of an airman from York, Robert W. Zercher, who was killed in action.
Another researcher with the bomb group started digging for more information on Zercher, son of Frank and Ella Zercher of York.
What Annette Tyson found is fascinating, according to this edited e-mail she sent Marsteller:

I did some checking and found a really interesting story. First off, Sgt. Robert Zercher belonged to the 729th Squadron of the 452nd Bomb Group. He is buried in the Ardennes American Cemetery. According to their website, (ABMC.gov), he was killed on October 4, 1944. That really confused me, until I did a google search on his name and found a post that said this:
On one of the war monuments in Apeldoorn (the Netherlands) is the name of Sergeant USAAF Robert W. Zercher, a ballturretgunner on a B-17 from 729 Bomber Squadron 452 Bomber Group.
On April 29th 1944, he and the rest of crew had to bail out when their B-17 was shot down by German fighters in the neighborhood of Apeldoorn. The Dutch resistance took care of the crew and hid them from the Germans.
Unfortunately, Sgt. Zercher was eventually caught by the Germans on October, 1st 1944, together with a British Flight sergeant named Kenneth Ingram. The Germans knew that they were Allied soldiers, but nevertheless they murdered them the next day, together with six members of the Dutch resistance. The
Germans laid their dead bodies in the streets of Apeldoorn, with a paper on their chests with the word ‘Terrorist’ written on it, to frighten the Apeldoorn population. After the war, a monument was erected for these unlucky Allied soldiers and resistance fighters to commemorate this atrocious war crime.

For some unknown reason, Robert Zercher’s family name is misspelled on the monument as ‘Zurcher’. We – a working group that described Apeldoorn’s war monuments in a book – are planning to correct this and to unveil the monument anew with the correct name at the next commemoration, October 2nd
2006.

At the same time we will try to publish a more in-depth description of Robert Zercher and his war experiences in the local newspaper ‘Stentor’ and on a website: http://www.monument.apeldoorn-onderwijs.nl/index.htm.

In the meantime we are looking for more details about the other 7 crew members, the mission (a mass attack on Berlin?), etc.
Jelle Reitsma Apeldoorn, the Netherlands

It’s all in Dutch, but it does have a photo of the monument (with Zercher’s name spelled correctly) and a photo of him.

Thanks to Jim and Annette for fleshing out the heroism of one of York’s own. 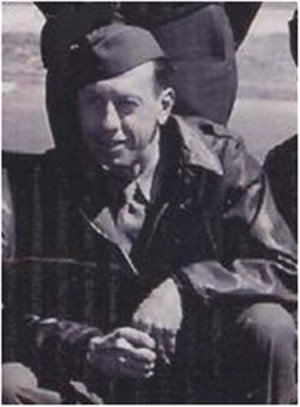 Here’s a photograph of Robert Zercher, courtesy of an Apeldoorn, Holland, website.