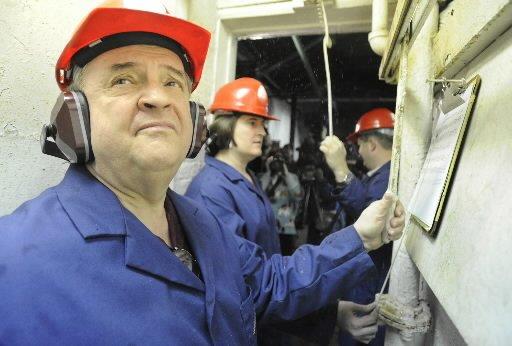 Whistlemaster Donald Ryan is at the helm of New York Wire Cloth’s steam whistle controls, continuing the Christmas concert dating back to the 1920s in York, Pa.. The concert is set again this year at 12:15 a.m., Dec. 25. “Mr. Ryan is excited about continuing the concert tradition this year but is keeping the carol lineup a surprise because many listeners like to guess the tunes,” a news release states. Background posts: The world’s loudest music without amplification from a non-musical instrument and The world’s loudest music without amplification from a non-musical instrument – Part II and New York Wire factory whistle concert: ‘We’d stand out on our driveway to hear it’.
York Town Square posts on the New York Wire Cloth steam whistle score among the highest traffic of any individual entries in the two-plus-year history of this local history blog.
But to add to these two-dimensional posts, we now have a sample of what the whistle sounds like – the haunting, fog-horn-like sound that has serenaded York since music teacher, Karl Alex Smyser commenced the performance in the 1920s….

Or rather, the Lancaster-York Heritage Region has the sample, available at: http://www.lyhr.org/

And now, the steam whistle, by the numbers, according to Lancaster-York Heritage Region:
Whistle’s location: 441 East Market Street, York.
Length of concert: 15-20 minutes.
Usual audience reach: 5 miles, on a clear night.
Maximum audience reach: 10-12 miles, according to some reports.
First year Marlin and Donald Ryan performed: 1955.
Years in past 58 that concert was canceled: 1986 and 2005.