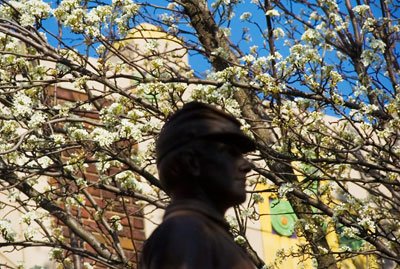 The Picket. Iron Mike, not seen, is at his side. Also of interest: Hanover, York County’s oldest borough.

Iron Mike might be one of the smallest of York County’s overlooked landmarks.
Mike’s a little statue — made of iron cast in York – standing guard over the monument of a mounted Union cavalryman in Hanover’s Center Square.
A Hanover Area Chamber of Commerce publication tells about the diminutive dog:

George Washington Welsh commissioned the casting and set it in his front yard. In 1879, the dog was moved to Hanover’s Mt. Olivet Cemetery to stand guard over Welsh’s grave.
But the dog spooked horses pulling mourners through the cemetery, and he was moved beside The Picket – as the cavalry statue was called — in 1905.
Mike remained there in the middle of the square until the oval was demolished in 1967, and the pair found a new home in one of the angles of the square.
Meanwhile, The Picket stood tall, representing all of the 4,000-plus Union troopers clashing in the Battle of Hanover, the day before fighting at Gettysburg.
Actually, the Picket qualifies as an overlooked landmark as well. It’s crowded into the northeast corner of a square in a town tucked into the southwest corner of York County.
Many county residents have never had the pleasure of sizing up the considerable Picket statue or the bantom Mike.
As for the pairing of the two landmarks, Civil War horsemen and infantrymen sometimes brought their dogs with them on the march.
So that works, too.
Other overlooked York County landmarks:
— The Little Courthouse
— Prospect Hill Cemetery
— War Mothers Memorial
— Work War II USO at former York County Academy gymnasium
— York’s Salem Square soldiers monument
— York’s Cookes House
–York’s rowhouses
–Wrightsville’s monuments
— The Columbia-Wrightsville Bridge
— Memorial trees along highways Route 30 & Susquehanna Trail.
— The Inches
— Camp Stewartstown
— The Wrightsville Bridge supports
— New York Wire Co.’s factory whistle
— Mary Ann Furnace
–York’s Hartman Building