How York Fair looked from the air in 1932 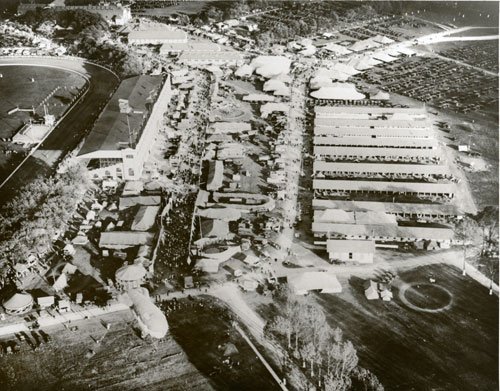 The York Fair Midway, behind the grandstand, is shown in this aerial photograph in 1932. Notice the number of livestock barns at right. Some of their footprint has been replaced by the now-Utz Arena. The grandstand was only six years old when this photo was taken, according to a York Fair history. Perhaps this photo captured the scene on a Saturday night. The fair, largely a daytime event for years, was starting to open at night. It opened on Saturday night that year, 1932. Notice what appears to be a blimp at about 7 o’clock in this photograph. This scene was captured by Madison Bay Company of East Berlin. The York County Heritage Trust sold prints for years in its bookshop, but it was part of the neat things available this year – as in all years – at the Trust’s Book Blast. The York Fair – the 2014 version – is set for Sept. 5-14. Also of interest: Memories of the Mighty Atom and other York Fair weirdness and Check out these aerial photos of scenes from York County’s past.

Other interesting info from all over … .

How many towns in York County still have no traffic lights?

Well, Pennsylvanians know that Mount Wolf is one of them because native son and gubernatorial candidate Tom Wolf is humorously making note of that in public statements.

Dover borough will observe it 250th anniversary on Aug. 23. A parade is set at noon that day. State Rep. Seth Grove gives some history of the borough in this YouTube video.
+++

Franklin County vet honored: A 97-year-old veteran of World War II has been honored with a French Legion of Honor medal.  Chambersburg’s Richard Methner flew in gliders, which must have been one of the scariest of many scary ways to enter battle.

Jeff Stike, a York County songwriter and performer, post this video on YouTube telling the story of the burning of the Wrightsville Bridge, just past 151 years ago.

+++
History mystery: Grand staircases always draw interest. See how you do in locating this: