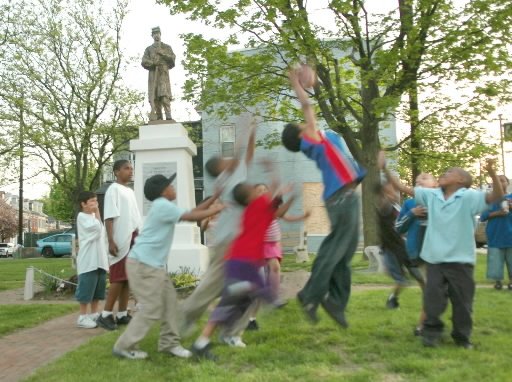 Neighborhood kids play in the Salem Square park as the renovated statue of a Civil War soldier looms in the background. For a photograph of the headless statue after it was damaged by high winds, see below.

The restoration of Salem Square’s statue in York intrigues for at least three reasons.

First, the statue offers a two-fer. It shows a Civil War soldier but celebrates the York Rifles unit’s involvement in both the American Revolution and the War Between the States.

That unit was an early responder in both wars. Its members marched to Boston to join George Washington’s forces in the seige of that city in 1775. And the unit guarded the Northern Central Railroad within hours of the Confederate firing on Fort Sumter… .

Secondly, markers observing the Civil War in York are rare. There’s the large statue in Penn Park, to be sure. And there’s a mini-mural in Cherry Lane. And there’s a historical marker in West York. But that’s about it. And there are maybe a dozen Revolutionary War markers in the York area.

And, as the photograph above suggests, it’s possible to combine cultural history with fun and games. The renovated statue highlights a rehabbed park in a neighborhood that is working hard to come back. That part of town badly needs safe, green space. The Salem Square park offers just that, complete with an able soldier standing guard.

High spring winds blew the head off of the Salem Square statue in 2004.