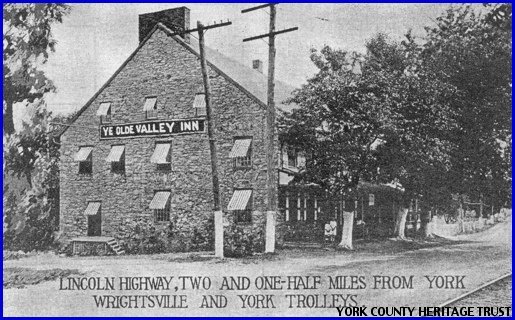 ‘Soon here in this country a three hundred year old building will be as scarce as a dinosaur,’ ‘The Codorus Valley Chronicles.’ Most pioneer mills are gone and Swiss-style bank barns are giving way to pole barns. The newsletter pointed to three old structures that should be standing today: York Collegiate Institute on South Duke Street and College Avenue, the neighboring York City Market and the old York Valley Inn, seen above, near where Springettsbury Township’s Wal-Mart stands today. Actually, part of the York Valley Inn stands today as the cemetery office for Susuquehanna Memorial Gardens in York Township. Background posts: Who was that slain Yankee messenger at Green Ridge? and Forgotten York Valley Inn may be rediscovered.

First came glass milk bottles. Then came cardboard milk cartons that paralleled their glass counterparts for years before replacing them.
Plastic bottles and jugs replaced the cardboard carton.
But somewhere in this lineage, the Brown family of Railroad, in southern York County, invented and produced a paper milk carton, the Mono milk container… .

No examples of this paper container are known to exist today, but stay tuned to more information in a future “Codorus Valley Chronicles,’ newsletter of the Jefferson-based Codorus Valley Area Historical Society Inc.
This is just one of bunch of neat items in recent ‘Chronicles,’ an example of work put out by many historical societies across York County. Some historical groups have Web sites and newsletters.Their efforts are all in the interest of giving county residents back their history.
Here are some other items of note from January and February “Chronicles.”

– An editorial gave the York Water Company thorns for the demolition of the historic brick mill house along the Susquehanna Trail. That was the house with the wrap-around porch that stood north of Jacobus, on the west side of the trail, north of the bridge near the Lake Redman dam.
– Two society members, Margaret and Megan Shaub, visited Germany where they made contact with two former World War II POWs with York County ties. Andreas Neuhauser, detained in Camp Stewartstown, returned to civilian life after the war, worked as a stone mason, a valuable skill as Germany rebuilt after the war. The Shaubs also visited Heinz Socke, not a Stewartstown detainee, who worked at York Tent and Awning Company. Margaret and Robert Shaub will provide a program on the camp at the Stewartstown Historical Society meeting at 7 p.m., March 12.
— D. Franklin Miller is collecting material for a new book on post offices and schools of Codorus and Mainheim townships. He’s looking for envelopes with postmarks: Hetricks, Wolfram’s, Esmond, South Summit and Xenia. Esmond might be hard to find. It existed for 43 days before it became known as Neiman.