Good night in Glen Rock: Dinner and a movie and the American dream, Part I 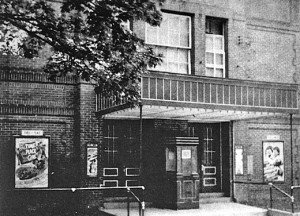 The Glen Theatre in Glen Rock, Pa., will celebrate its 100th anniversary in 2013. It is the last operating movie theater outside of York City. This photograph, courtesy of the Glen Rock Historic Preservation Society, was taken circa 1940. (Click on the photograph to enlarge.) To find out what’s showing at the Glen Theatre, visit: www.glen-theatre.com. And to view what’s on the menu at nearby Mignano Bros. Ristorante Italiano, visit: www.mignanobrothers.com. Also of interest: Parade Music Prince Roland Seitz: From Glen Rock to Friday Night Lights.

I planned a recent Saturday evening dinner and movie as an adventure.
I looked forward to the wonderful meal and then a stroll to the movie theater to see “War Horse.”
But not in York this time, although the city offers several memorable restaurants, and the Capitol Theatre is known for its vintage flicks.
My wife and I planned a dinner and movie night out . . . in Glen Rock, that small town nestled in the hills and valleys in southern York County.
I stand to be corrected, but I’m thinking that’s the only town outside the city where you can do fine dining and then walk to the movies.
So that meant Italian at Mignano Bros. Ristorante Italiano and Steven Spielberg at the Glen Theatre.
Just like in the old days.
+++

Mignano’s is one of those Italian eateries that can serve quality pizza and subs to more expensive fare with names I can’t pronounce or spell.
But the always fine Mignano food in the warmly decorated former Glen Rock post office wasn’t the best part of the meal.
The highlight came when one of the brothers, Salvatore, stopped by our table.
He related with relish how he would soon become an American citizen in a ceremony in York County Court.
He spoke about the challenge of the citizenship test, and we discussed that he probably knew more about America than many native-born folks.
And then Salvatore said something that made the evening adventure worthwhile, even that early into it:
What a great country we have where a family could come here with little and through hard work over 15 years build a successful business.
Indeed, it’s the type of eatery you go to before a movie… .

For the rest of the story – with the evening adventure continuing at the Glen Theatre –  see Saturday’s yorktownsquare.com post Good night in Glen Rock, Part II.

More about the Glen:
The Glen Theatre came up in another of Don Swartz’s wonderful captions explaining photographs on display at the library in Glen Rock. In fact, he paints such a beautiful word picture that we’re not even going to run the photograph, at least not now:

From Don, the late mayor of Glen Rock:

“ONE OF THE SUBTLETIES OF THIS PICTURE IS THE STREAM. THE GIANT WINDMILL? Overt. The dancing boys? Obvious. But the stream? See that gash in the lawn, just behind the boys? There it is. And down the block. It starts up near Wetzel’s, then tries paralleling Manchester Street, goes behind the Glen Theater, under Trinity United Church of Christ’s lawn and parking lots, then under the other lawns, these days, on Manchester, and under Winter Avenue, before going through the basement of the building that used to be Bixler’s, next to the bank. Right; through the basement. Then under Hanover Street to empty in the Codorus, startling the ducks.

“The stream in the lawns is covered now, and the hitching posts at what was then the Reformed Church have long since yielded to the automobile. But the stream still goes through the basement. Who knew? How’s that for subtle?”