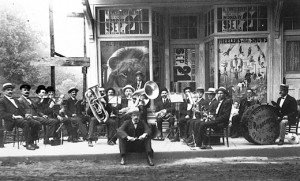 Conductor Roland F. Seitz is seen on the curb outside the Glen Rock Musical Association on 3 Main Street, then the Cramer building, in that southern York County borough in 1908. Seitz, a younger contemporary of ‘The March King’ John Philip Sousa, has been compared to the composer and gained a title of his own. ‘The Parade Music Prince.’ (Click on photo to see larger view.) Also of interest: Rocks in the Glen turns into town where things happen and Part I: Parade Music Prince Roland Seitz … .

My wife and I spent a delightful night out in Glen Rock recently. (More about that Friday)

Strolling the streets there, I thought about a world-renowned public figure who walked those same sidewalks: Roland F. Seitz. (See bio on Wikipedia.)

He operated a music shop there and conducted the Glen Rock Music Association, which brings us to what the late community pundit Donald Swartz said about that musical group.

“The conductor, Roland F. Seitz, who lived in Glen Rock and is ranked with Sousa as a composer for band, is sitting on the curb. The lion in the window is a poster; the kid isn’t. The Association was formed in 1872. In 1881 it played at the centennial of the Battle of Yorktown. In 1882 it played in Philadelphia for the tercentennial of William Penn’s arrival. In 1886 it serenaded Grover Cleveland and his prospective bride as it marched past the White House, and played in Toronto for the reception of the Governor General. On September 6, 1901, it played at the Pan-American Exposition as part of the official program; when President McKinley was assassinated some band members were only 20 feet away. Then in 1913 the Association purchased property on Manchester Street and built a 500-seat auditorium for concerts, graduations, civic events, and today, as the Glen Theater, films.”

Notice that the history cloud at the bottom right rail of this blog shows Glen Rock in large type. This means that the larger the type, the more I’ve written about a town or topic.

So I write about Glen Rock a lot.

It’s a great town with a lot of history.

So, there’s a lot to write about.

No, to anticipate your question, I live in York Township.