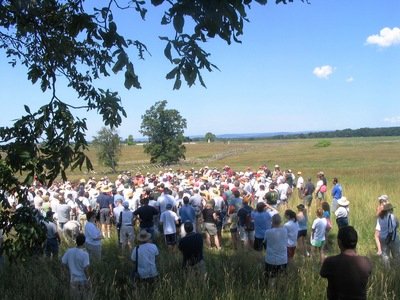 A crowd follows a ranger on the battlefield at Gettysburg in the 145th anniversary of the Battle of Gettysburg. Photo courtesy of Scott Mingus. Background posts: Gettysburg Cyclorama, with new shape, set for Sept. display and Gettysburg battlefield produces steady supply of news, Part I.

In any given month, the battlefield at Gettysburg produces numerous news stories, even in the “off-season.”
And these story just don’t come from updates on the new visitors center construction or controversies over the current center… .

Re-enactment dates set: The 145th anniversary re-enactment of the Battle of Gettysburg is set for July 4-6.

Already, more than 100 cannons and 400 mounted cavalry are registered, with more expected, according to organizers.
All 100-plus cannons will be on the battlefield for the artillery barrage preceding Pickett’s Charge on the afternoon of Sunday, July 6. An assortment of artillery will also be featured each day during the battle re-enactments. The cannons will be part of a special artillery commemoration on Saturday and Sunday, July 5 and 6.
The more than 400 cavalry, along with hundreds of dismounted cavalry, are expected to take part in a special re-enactment at 1:30 p.m. Friday, July 4.
For more information: www.gettysburgreenactment.com or (717) 338-1525.
Wills House re-opening planned: Gettysburg business and community leaders unveiled a plan this week to put the “finishing touches” on the David Wills House, a historic structure on Lincoln Square undergoing a $6.6 million renovation project.
Abraham Lincoln is believed to have finished his Gettysburg Address in a second-floor bedroom of the house, which the Gettysburg National Military Park plans to open as a museum Nov. 18.
The partnership between Main Street Gettysburg and the Gettysburg Area School District was formed to accomplish two goals.
First, they hope to raise as much as $52,000 to fund the detailed paintwork of the structure’s brick exterior, so that the building would look as it did during the Civil War.
Secondly, Gettysburg students will be involved in the campaign by creating artwork to be sold at auction and constructing a large-scale model of the Wills House.
Contributions can be sent to Main Street Gettysburg, 571 W. Middle St., or by calling 337-3491.
Walking tour size limited – In time for the upcoming tourist season, Gettysburg officials are on schedule to approve an ordinance that places a 26-person limit for guided walking tours in the borough.
Controversy about a potential limit, which affects the town’s many ghost-tour companies, was sparked last summer when the borough’s public safety committee proposed a 15-person cap.
Objections from the owners of ghost-tour companies prompted the committee to increase that number to 26, including the tour guide.
Monday, the borough council gave solicitor Harry Eastman the authority to advertise the ordinance so council can vote on it in March.
If the ordinance passes in March, the regulations would be law by April 1, Eastman said.
+++
Off-the-battlefield activities – A Gettysburg bed-and-breakfast owner wants people to know there’s a lot to learn about Civil War-era life beyond the battlefields.
So she created a promotional package designed to help people understand more about civilian life during the war.
Paulette Lee, who owns and operates Passages Inn Gettysburg with her husband, Gary Froseth, created Gettysburg Girlfriend Getaways.
“The idea I had was to be in partnership with a number of different sites,” she said of working with other inns and businesses in her community.
The getaway packages, touted as an opportunity for friends, family members, colleagues and hobbyists to learn more about Gettysburg and surrounding areas, are designed for women but men are also welcome, Lee said.
For more information about the getaway package, call 334-7010 or visit www.gettysburggirlfriendgetaway.com.
Just consider the following summaries from just a few stories published in the York Daily Record/Sunday News or the Hanover Evening Sun in this 145th anniversary year:
Tour guides establish office – Members of the Association of Licensed Battlefield Guides have voted to rent office space in Gettysburg. According to ALGB spokesman Chris Rebmann, more than 90 percent of the association members returned ballots. Of those, 70 percent voted to authorize association president Rick Hohmannn to negotiate a lease on space near South Street.
Rebmann said the decision had nothing to do with a recent disagreement between the guides and administrators of Gettysburg National Military Park over the scheduling of tours. The guides had been discussing the possibility for years, and the decision came about because of the availability of rental space and the need to move to a new visitor center, set to open this spring, he said.
The rented space will house office equipment, meeting space and the association’s research library. The guides will still have space in the new visitor center, which will be used as a break area and lounge.