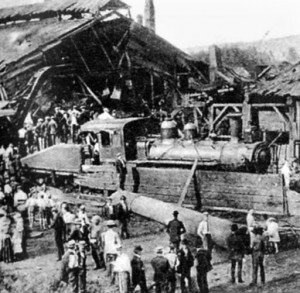 This photo shows the aftermath of the explosion at the York Roller Mills in 1908. “For years, the explosion was the chief topic of conversation where more than two people gathered,” a newspaper reported years later. Background posts: Agnes, by the tragic numbers and The night the furnace ‘blew’.

Both the Confederates and Yankees sustained more than 300 casualties in the Battle of Hanover on June 30, 1863.
And about five people lost their lives in the waters of Tropical Storm Agnes in 1972.
Paul Gamboa-Taylor pleaded guilty to killing five people with a ball-peen hammer and knife in his York home in the early 1990s.
But the York Rolling Mills explosion 100 years ago in August was the worst industrial accident on record… .

The blast killed 10 people and reportedly injured up to 20 workers at the plant, then located near Codorus Creek near the old York County Jail.
The blast rent the the mill in half, hurling a two-ton piece of boiler several blocks where it demolished the back of a house on Hay Street. Metal bits shot into the walls of nearby houses.
Here are some facts about the blast, based on press reports found in York County Heritage Trust files:
Date: Aug. 10, 1908.
Impact: The explosion was felt everywhere in York and heard throughout much of the county.
Cause according to survivor Anton Sidler: Cold water entered a dry, red-hot boiler, causing the build up of pressurized steam.
Coroner’s verdict: Faulty boiler.
Sidler’s account: “I was working by the big rolls next to the boiler and the next full conscious moment I had was two weeks later in the hospital – with a fractured skull, the left side of my face burned off, deep, severe burns on my arms and legs and a broken rib where a 20 penny nail spike had punctured my lung.”
Account from the Gazette’s Walter F. Krone: “Men who happened to be in the neighborhood say they heard a great noise like that of an explosion of dynamite. Looking toward the mill, they heard a crash of timbers and they saw the center of the mill sink down to the earth.”
Gazette 50-year retrospective: “The York tragedy, like others throughout the country, was part of the bitter toll paid for reasonable legislation on in industrial safety.”
– Photo courtesy York County Heritage Trust