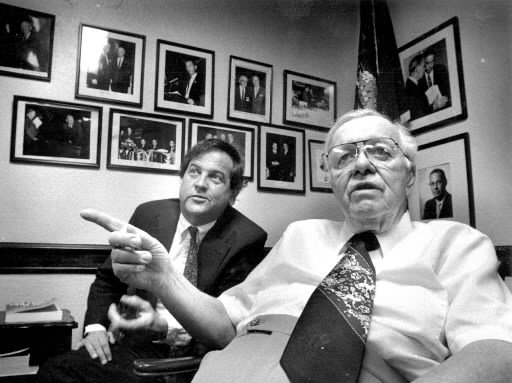 Newcomers to York County might assume Republicans, with their big registration advantage, have always led the county election parade.
The fact is that York County took a liking to Jeffersonian and later Jacksonian politics in the 1800s and continued to hold onto their Democratic Party registrations for decades.
That’s, in part, why Abraham Lincoln did not carry York County either in 1860 or 1864… .

Although no study of county registration has been undertaken over the decades, it is known that Dems held a 10,000 vote lead in 1979. Ten years later, they trailed by 12,000 votes.
The year 1984 appears to be the moment that Republicans took the lead that they hold today after a couple of years of nip and tuck. That year’s registration stats stood at: GOP, 65,793; Dems, 61,085. Today, that the GOP’s registration lead is about 45,000.
The following excerpt from “Never to be Forgotten,” based on newspaper reports, explains why:

Pundits credit the popularity of President Ronald Reagan, the demise of Democrat-heavy York city and the organizational skills of Republican Party chair John Thompson. Meanwhile, the Democrats lack organization, leadership and cooperation within the party and suffer public embarrassment when a federal grand jury indicts several of their county leaders in 1980. They are charged with taking payments for county contracts. In the highest profile case, a federal jury convicts former President Commissioner Carroll H. Leppo of one count of extortion in connection with an architectural contract for the new county prison. The GOP dominance grew in the 1990s. By 1997, the Republicans enjoyed a 101,783 to 71,420 registration lead. In another twist, the traditionally Democratic York Daily Record endorsed Republicans Ronald Reagan in 1984 and George Bush in 1988. The traditionally Republican York Dispatch endorsed Democrat Bill Clinton in 1992.