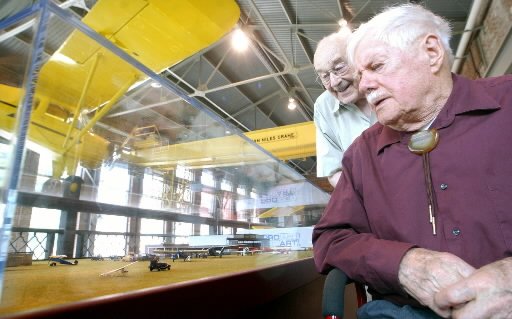 Model builder Paul Schiding talks about the former York airport that was along Haines Road, as former airport flight instructor Jack Hespenheide, listens in this 2006 file photo. The model of the airport remains on display at the York County Heritage Trust’s Agricultural and Industrial Museum. The red-brick administration building is part of the model. (See photo of the administration building below.) Background posts: Museum exhibit brings back early days of high fliers and It’s a bird. It’s a plane. It’s cigars with wings.

A model of York’s first airport, started in 1930 on level land in the present-day Fayfield area near Misericordia Nursing Home, presents an intriguing exhibit at the Agricultural and Industrial Museum in York.
My eyes always go to the administration building, a low brick structure.
The building has fascinated me since I read about it and this early airport in John F. M. Wolfe’s “Profile of Aviation, York County, Pennsylvania, 1925-1998.”
The large hangar (see photo by clicking on background post above) was dismantled after the airport closed later in the 1930s.
But, Wolfe wrote, the administration building is now a private residence, located at 7th Avenue and Haines Road… .

He didn’t say which corner, but the most promising residence, on the southwest corner, has always befuddled me.
I couldn’t tell how a low red-brick building could become a multi-story residence.
So after dozens of trips past the house, I brought along a relative who is also a pilot. We had viewed the model at the ag museum and immediately drove to Haines Road. It also befuddled him, at first, but then he noticed a porch that resembled a fixture on the model.
And then it all became clearer.
If you squinted you could see that that the house was built around a painted brick structure – the former administration building.
See what you think next time you’re driving north or south of Haines Road.
York County is loaded with such unsung sites, and one of the fun parts of living here is singing about them.
For additional unsung site, see this blog’s Unsungobscure-sites category.