Digging Coulsontown: ‘This is not Indiana Jones’ 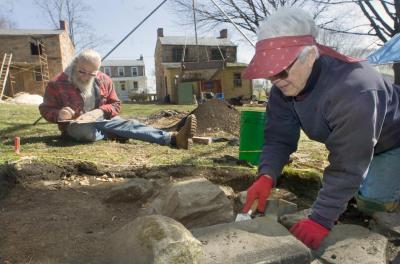 Marley Boyd helped in a dig area in the of Coulsontown, Peach Bottom Township, Pa. The Coulsontown miners’ cottages are in the background. Excavators are looking for answers about how Welsh residents lived in the mid-1800s. (See additional photo and video by Paul Kuehnel below.) Background posts: Wanted: One slate-roofed privy from Delta, Pa., Time almost forgot Welsh miner’s hamlet of Coulsontown and 100 years later, Delta clock keeps on ticking.

“Sonic Pixie,” a Web commenter on a York Daily Record/Sunday News story on an archaeological dig near the old Welsh miners’ cottages in Coulsontown, had it right:
“It is really amazing to see individuals in the community who are passionate about preservation and gaining a greater sense of understanding of who we are and where we came from.”
This slate mining village in the southeast tip of York County has to be on a top 10 list of intriguing, obscure sites around here.
The story (4/17/08) titled “Digging local history,” follows: 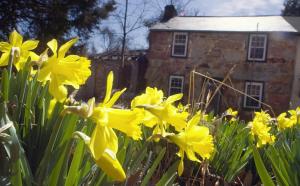 One of oldest cottages is in the background, behind the daffodils.

Tucked away in the southeastern corner of York County is a piece of history unlike any other in the United States.
This portion of Peach Bottom Township is home to the Coulsontown Cottages, four two-story structures built from slate and stone by the area’s early Welsh settlers.
Since the Old Line Museum of Delta bought two of the cottages 18 months ago, much work has gone into restoring these 150-year-old quarrymen’s quarters. The latest activity took place this weekend when the Archaeological Society of the Northern Chesapeake opened a dig site on the Green Road properties.
“We’re trying to help (The Friends of the Welsh Cottages) understand in an organized and controlled way how to get the data that answers their questions about the Welsh people who lived here,” said William McIntyre, former president of the archaeological society.
Preparation for the dig began months ago through conversations McIntyre had with Donald Robinson, the Delta resident who was instrumental in the purchase of the cottages, and Dan Coates, current president of the archaeological society.
More recently, McIntyre and other society members did a property site survey, then mapped the perimeter and plotted its location on a grid. Friday, a group of anthropology students from Harford County Community College spent a few hours at the site assisting with test holes.
“In Phase I, we try to locate points on the site where there is the highest potential to find evidence of features and activity,” McIntyre said. At these points, they dug test holes about 18 square inches in size.
By Sunday morning, the archaeologists had found two points interesting enough to warrant pursuit of Phase II, the creation of excavation units, or larger areas in which they dug below the “plow zone” of the soil. One was along the foundation of one of the homes, and the other was at the rear of the property.
“This is not Indiana Jones. We’re not going to come up with a golden ark,” McIntyre said, laughing. “If we’re lucky, we may find an item that coincides with the dates they think the cottages were built.”
What they found were a few pieces of pottery, a chisel and some other nondescript artifacts. The highlight was the discovery of two large rocks in a test hole at the rear of the property that appear to have been placed there with purpose. The archaeologists wonder if they are part of a long-forgotten foundation, a garden wall or some other structure. The answer must await further excavation.
“Many times we will end with more questions than we started with,” McIntyre said. “Archaeology is a science, but it’s also an art.”
THE HISTORY
What are the Coulsontown Cottages?
When the slate industry of Wales became depressed in the 1840s, desperate slaters were encouraged to emigrate to America, where their skills could be put to good use in southeastern York County, the site of a superior vein of slate.
Some of those quarry workers built homes in what would become known as Coulsontown, a village of about a dozen homes erected between 1845 and 1860.
The cottages that were constructed from wood are gone. The four that remain are two-story stone structures made of Cardiff conglomerate, a metamorphic rock unique to the area, and roofed with slate.
These quarrymen’s cottages are exact replicas of the construction style found in the slate region
of northern Wales. It is believed that no other example of such construction exists in the U.S. today.
Because of the efforts of local residents, the cottages and other portions of nearby Delta were listed on the National Register of Historic Places in 1985. A year later, Historic York Inc. agreed to buy one of the cottages.
The board of directors of Delta’s Old Line Museum, a repository for the area’s slate-mining and railroading history, in 2006 bought that cottage and one other with proceeds made from the sale of the local history book, “The River and the Ridge: 300 Years of Local History”.
Since then, a mix of volunteers and contractors whose services have been paid for with donations have worked to restore the structures, both of which will eventually be opened for public tours.
The two other remaining cottages are privately owned. Only one is occupied.
TO HELP
The Friends of the Welsh Cottages, a branch of the Old Line Museum, continues to raise funds for the restoration of the Coulsontown Cottages.
To learn more about the cottages or how to make a donation, contact the Friends group at Old Line Museum, P.O. Box 35, Delta, Pa., 17314 or e-mail oldlinemuseum@aol.com.
Tours of the cottages are available by appointment only. For details, call 717-456-7124.