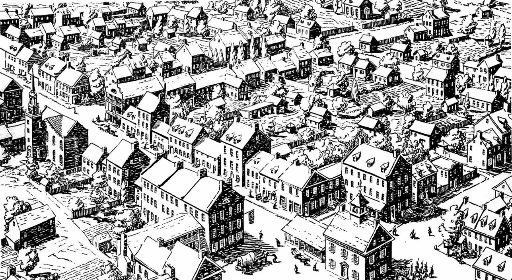 Dem presidential candidate Hillary Clinton will hold a rally at the intersection of West Market and Beaver on Saturday in York, Pa., seen at the 9 o’clock position in this drawing. (See more about this drawing below.) Background posts: Downtown thrived in post-WW II York – 9/20 iconic images, ‘It’s something you can’t experience at a store in the mall’ and President Buchanan’s fall reflected his presidency.

The Hillary Clinton campaign’s pick of intersection for its York rally is a little weird.
That’s not a particularly distinguished city intersection, at least in 2008… .

One block west, and the Colonial Courthouse replica and Gates/Plough Tavern complex awaits.
One block east, York’s historic Continental Square, site of the the old courthouse where Congress adopted the Articles of Confederation.
Here’s some background on the key buildings on the rather gritty intersection set for the Clinton rally, Hillary Clinton’s second visit to York and the first of her presidential campaign.
Northeast corner: The current York Bank Building was modeled after the old State House that joined the county courthouse in Continental Square. During the American Revolution, Mad Anthony Wayne set up his headquarters and a recruiting station on that site (visible in drawing at top of post). The building housed York Bank’s headquarters for years but has had little public function under M & T Bank’s ownership.
Northwest corner: The National House (visible in drawing at top of post) is a wonderful landmark, but it has some bad historic symbolism. It was there that Democratic President Martin Van Buren stayed after the Panic of 1837, when the economy was so bad that he refused a lavish dinner because of the way it would have looked.
Southeast corner: This was the site of the church where George Washington worshipped (visible in drawing at top of post) in 1791. Weinbroom Jewelers and Woolworth’s, longtime key tenants in today’s buildings, are no longer in business.
Southwest corner: This site accommodated noted American Revolution officer Maj. John Clark’s house, where the Hall & Sellers press printed money and the Pennsylvania Gazette. The Bon-Ton department store stood proudly here before moving out of the downtown, and the county took it over in the 1990s. The building has since demanded constant infusion of tax dollars for upkeep.
So, however historic, it’s not a happy intersection.
Perhaps the Clinton campaign likes the symbolism of offering hope to a sober situation.
A better location to do that would have been near the Habitat for Humanity house that county Dems and Republicans are jointly remodeling.
Both parties are raising funds and will jointly spend sweat equity in Unity House, one of six Habitat houses being rehabilitated on East Prospect Street in York.
At least the choice of intersection spares the public from seeing candidate Clinton wielding a hammer in a staged construction photograph at Unity House.
But at least Hillary Clinton came to York. 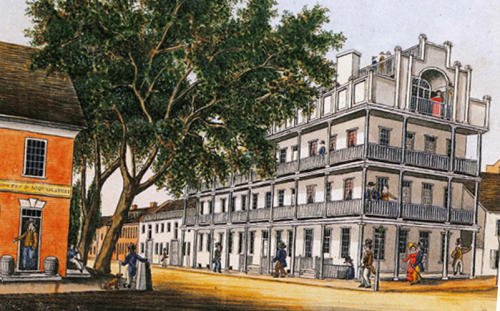 About the drawing at top on this post:
The artist of this painting of York pulled from several eras. Bottom right, the York County Court House is seen without its neighbor, the State House, placing the drawing before 1793. But the building at West Market and North Beaver streets, called the National House today, was not constructed until after 1800. Today, the large painting, drawn in the mid- to late-1970s, serves as a backdrop on a stage in Stein Hall at York’s Trinity United Church of Christ. It was part of a sight-and-sound show used to orient new members and tourists.
Additional background posts: First York City Latino councilman temporarily state’s top appointed Dem and York County Dems slumped, GOP prospered in 1980s.
For scores of posts on other visits by presidents and presidential candidates, see this blog’s presidential stops category.