Beautiful Shady Lane estate beautiful even in the rain: Linked in to York County history, Sept. 19, 2012 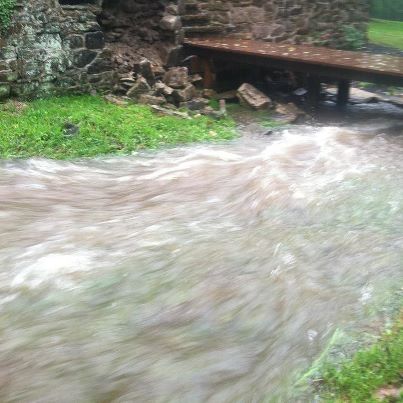 Rain pelted historic Shady Lane on Tuesday, prompting estate owner Steve Kohr to write on Facebook: ‘The spring house wall just came down. Hope this let’s up soon!’ Seeing this, I couldn’t resist revisiting that beautiful place here on yorktownsquare.com. The estate is marked by that wonderful stone gate you see to the left as you head toward Manchester from Emigsville. Shady Lane was in the news when Steve opened up his property, site of an old distillery, to the grassroots Preserving York picnic earlier this year. Steve did not seem upset by Tuesdays’s storm damage, commenting on Facebook: ‘Oh well, what is one more project when you already have so many!’ See additional photos Shady Lane in the storm on Facebook. One of those photos appears below. Beautiful Shady Lane is beautiful even in the rain. Also of interest: Using York County history to create community embodies a modern trend.

Steven Spielberg will be the guest speaker at Lincoln Day observances in Gettysburg in November.

That meshes with the release of his movie, “Lincoln,” according to a Hanover Evening Sun story.

The film will be opened nationwide on Nov. 16, three days before Spielberg’s speech on the anniversary of Lincoln’s Gettysburg Address. Remember when Spielberg was spotted at the Wills house earlier this year and writing in the guest book, “Thanks for keeping our history”?

The York Fair is over: But couldn’t wait another year to share this York Fair trivia loaded with history, courtesy of ydr.com. My favorite: “Elvis almost appeared at the 1956 York Fair. $7,500 was the agreed price that jumped to $15,000 with no guarantee that he would appear since he was about to sign his first movie deal: Love Me Tender for $100,000. When his courtesy car didn’t arrive at his hotel, 1976 York Fair entertainer Red Skelton called a cab, got dropped off at the Market Street gate, paid to enter and walked down the midway to the grandstand and then performed. Before he left York, he visited patients at York Hospital.”

A beautiful square: New Oxford’s square is arguably the most beautiful in this region, with its grassy infield and fountain. And Borough residents are looking for more improvements to Center Square. 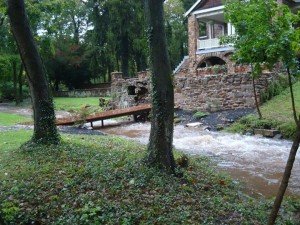 Water rushes past Shady Lane in the middle of Tuesday’s storms.