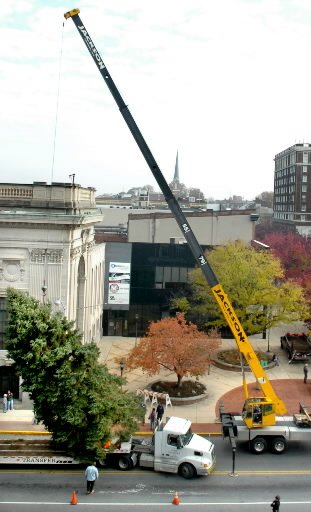 A crane lifts York, Pa.’s, 2007 Christmas tree from a trailer and temporarily plants it in Continental Square. Citizens Bank, formerly First National Bank among other predecessors, sits in the background. The bank is closing that office in February. Also of interest: When did York’s main intersection change from Centre to Continental Square?

Every year, I offer up a local history quiz designed to spark family discussion as loved ones gather for the holidays.

We hear the questions do their job, prompting conversation about our wonderful county.

So this year, we’ll spread it out, putting up 10 questions this week and 10 more on New Year’s Day.

For more information on each topic in this quiz, click on the links with the answers or search York Town Square:

1. At the time it went up, the North George Street McDonald’s was tagged as Downtown York’s first fast-food restaurant. Actually, it had a predecessor. Can you name that restaurant?
2. Citizen’s Bank is closing its doors on Continental Square. What was the bank originally located on that northeast corner site?
3. Since the Yorktowne Hotel opened in 1925, people see strikingly similar-appearing hotels in other towns they visit. Are they just imagining this resemblance?
4. The late civil rights hero Daisy Myers was known as the Rosa Parks of the North after civilly withstanding a racist onslaught in Levittown in 1957. Who was her husband?
5. Everyone knows the Seven Gates of Hell in Hellam Township is a history mystery of mythical proportions. It is said that no one who passed the fifth gate ever returned. It is purportedly located on Toad Road. Is Toad Road also mythical?
6. Why the inconsistency in spelling between Hellam Township and Hallam Borough?
7. The late Lou Silverstein, an assistant managing editor of the New York Times, visited York County in the early 1990s to do some work. The product of his labor is apparent today. What did he work on?
8. York County’s Mary Reineberg served with a World War II WASP unit, piloting planes from one base to another. Her sister, Mildred, now Sister Clare, left a successful Hollywood film career to become a nun. What was her screen name?
9. American Revolution pamphleteer Thomas Paine has long been associated with the Cookes House off Penn Street. Who is owner of this 1760s house, who is also a tireless researcher about the landmark’s history?
10. Before its demolition in 1887, the former home of Declaration of Independence signer James Smith contained a large, flat tombstone in its basement with an epitaph. Where is that stone today?

1. Joe Bury’s Famous Hamburgers eateries were located downtown and throughout the York area. Interestingly, the growth of national fast-food restaurants opening in this area helped spell the end of the homegrown Bury’s chain.
2. This is a bit of a trick question. First National Bank built the beautiful building in 1926 — the height of the Roaring 20s. But in 1777-78, another bank operated there. The U.S. Treasury Department accompanied the Continental Congress to York and operated from Archibald McClean’s house on that site for part of that nine-month visit.
3. Community leaders contracted with the Hockenbury System, connected with the American Hotels Corporation, to successfully sell shares in the community that underwrote the Yorktowne. Other Hockenbury Hotels include the Lycoming in Williamsport, the Francis Scott Key in Frederick, Md., and the Hotel Jamestown in Jamestown, N.Y.
4. Daisy Myers married York County native and World War II veteran Bill Myers after the war. Myers worked as an engineer for York Corporation and other employers. He died in 1987. “He was my best friend, and I miss him every day,” Daisy Myers wrote in her autobiography “Sticks ’n Stones.”
5. Hellam Township’s website states that the site attributed to the Seven Gates of Hell is apparently located off of Trout Run Road. A search of Hellam Township’s website, , does not bring up a Toad Road.
6. When Hallam borough was incorporated in 1908, organizers made a decision about its spelling. The new municipality would be spelled differently than its older and much larger big sister, Hellam Township, founded in 1739. Hallam was used because it was the original English spelling.
7. Lou Silverstein, largely responsible for the look and feel of the New York Times in those days, served as a consultant in the redesign of the York Daily Record. That newspaper and the York Sunday News bear that basic design today, with some tweaks.
8. She was known as Elaine Ryan, and one of her credits was “Mr. Belvedere Goes to College.” Actually, Universal York blogger June Lloyd has written much on the sisters.
9. Michael Helfrich, owner of the famous house, wrote a scholarly piece in the 2011 “Journal of York County Heritage” strengthening the link between Thomas Paine and the Cookes House. Paine lived in York during Continental Congress’ visit in 1777-78. Helfrich is also in the political arena, gaining a York County judge’s nod last week as victor for a city council seat.
10. This is definitely a trick question. Those planning the 250th anniversary of First Presbyterian Church in 2012 have the epitaph but are on the hunt for the stone. You might call it a writing without a stone. Anyone knowing its whereabouts should contact Charles LeTocha, mjletocha@gmail.com.