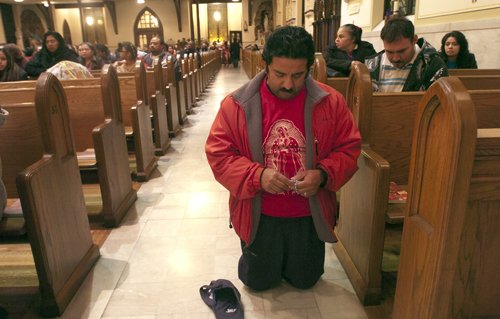 William Arais kneels during Rosary prayer in an Our Lady of Guadalupe event at  St. Mary’s Roman Church in York earlier this month. Latinos in church and around the city are more visible than a decade ago. In the past 10 years, York’s Hispanic population almost doubled.  And more than half of all Hispanics in York County live in the city, according to U.S. Census numbers. The Latino growth helped the city of York reverse a downward population trend that commenced after 1950. The city reached a population of almost 60,000 in 1950 and came in just above 40,000 in 2000. Census numbers show that the city’s population is 43,718 today, a 7 percent increase. For more census numbers, including specific facts about the city and county’s Hispanic population, see ydr.com’s U.S. Census page. Also of interest: York, Pa.’s, Spanish Council organized in 1974.

Responding to a previous post about Joe Bury‘s iconic hamburgers, York countian Larry Good has this story to tell:

“First met Bury’s burgers 1941 York Fair went to the fair with my friend and his Mom. My Mother told me when I eat NEVER buy food from someone who Is not from York County. I have always followed that rule even today. My friend’s Mom took us to Bury’s burger stand and ask me If I had any money. I pulled out my hanky and there was two quarters tied very tight In the corner, she untied the knot and paid.

“I cannot remember the price or what we had to drink but, I proudly came home with some change. My first of many Bury’s burgers. It was my first York Fair and the great thing was we got a free ticket at school. Imagine sending a kid to the fair with two quarters today.

“It was around 1963 and I had just returned from six years In the Navy, a friend from town was the parts manager at the new VW dealership on East Market St. He asked me to come to work for him In the parts dept.

“There was a lunch wagon stopped daily at the dealership but I always ate at the Bury’s Restaurant further West on East Market St.”

Good told about a fellow employee who he would invite to go along with him for lunch:

“He was too poor In those days to eat lunch out and his wife would bring his lunch everyday In a brown paper bag. And I was too
poor to buy his lunch. He Is not too poor today. Thanks for the memory.” (See additional Bury links below.)

She’s the 15th player to do so, either male or female, according to the gametimepa.com.

Blog post of the day: Universal York’s June Lloyd has been blogging on Trinity United Methodist Church’s fate. Well, she reports (and includes a neat drawing) that it’s not coming down.

Forum of the day, The Exchange: How would the discovery of life elsewhere in the Universe affect your religious beliefs? (Well, they’d probably find former York countians there given that the county is the center of the universe.)

Also of interest:
– Before there was McDonald’s, there was Bury’s Famous Hamburgers in York, Pa.
– Before Geno’s made news in Philly, Gino’s headlined in York.
– About Avalong Dairy and Melvin’s Drive-In: ‘I am some what familiar with the history of the area’.
– Mack’s is short for McDaniel’s, but in York County it means ice cream.
– The 1950s, ’60s: ‘The greatest time to grow up in York, Pa.’.