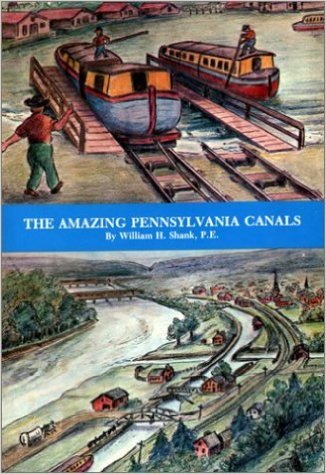 One of William H. Shank’s many books.

York has lost one of its most widely circulated authors.
William H. Shank, 91, died over the weekend.
The engineer-turned-author did not write high profile, easy-to-read romance novels or children’s stories.
His topics focused, literally, on where the rubber meets the road… .

Shank wrote 13 history books on Pennsylvania transportation — canals, roads, railroads.
He worked hard to make difficult facts, figures and engineering information accessible, as evidenced by some of his titles: “Indian Trails to Superhighways”; “Three Hundred Years with the Pennsylvania Traveler” and “The Amazing Pennsylvania Canals.”
He did this through the American Canal & Transportation Center, a family-run publishing company still in operation.
The center’s Web site provides an accurate feel for Shank’s: “Vanderbilt’s Folly, A History of the Pennsylvania Turnpike”:

“In this profusely illustrated booklet, Shank has captured the romance of the days of open warfare between the New York Central and Pennsylvania Railroad in the 1880’s. If Vanderbilt had completed his railroad through the Allegheny Mountains, he might have put the Pennsylvania Railroad Co. out of business. As it turned out, after 50 years of abandonment, the nearly completed tunnels set the stage for America’s first superhighway, the Pennsylvania turnpike.”

Knowing this story gives you a feeling of wonder when traveling through one of the tunnels east of Somerset and other turnpike tunnels.
I join the ranks of many people whose first exposure to Pennsylvania history came from Shank’s books distributed for years in gift shops at state parks and historical sites.
His books remain reliable, interesting reads for transportation enthusiasts and budding historians.