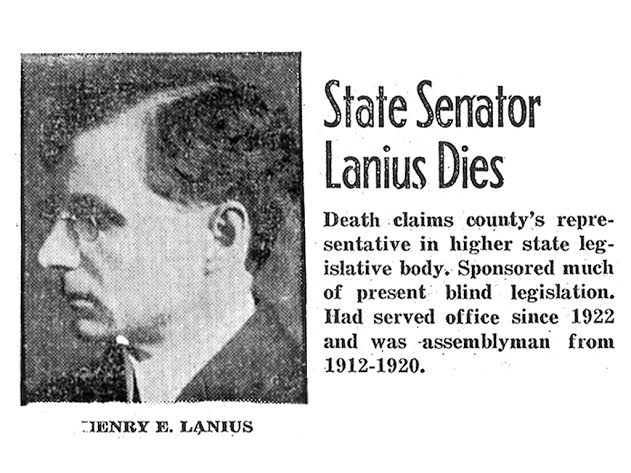 Karen Emenheiser, visiting the York Daily Record newsroom in Sept. 2006, discussed the fact that she was visually impaired, classified as legally blind.
It is unusual to talk with a candidate for public office — she’s on the GOP ticket for 95th legislative district seat — who is handicapped… .

But if Emenheiser is successful in her bid for the seat, currently held by the departing Steve Stetler, she wouldn’t be the first visually impaired person to hold a legislative seat from York County. (She’s running against Democrat Eugene DePasquale.)
Henry Lanius of Spring Grove served for decades in first half of the 20th century. He lost his sight in an industrial accident in 1903.
Emenheiser’s visual disorder is called “congenital achromatopsia.” Her peripheral vision in fine. She said in a recent interview that her vision otherwise is as if she’s “looking through a pair of clear lenses with a strip of tape down the center.”

More information on Henry Lanius, taken from “Never to be Forgotten” follows:

Henry E. Lanius loses his sight in an industrial accident, but he gains insight about the welfare of the blind. He served in the Pennsylvania House from 1912 to 1920 and the state Senate from 1922 until his death in 1943. He was a champion for the visually impaired. “Senator Lanius sponsored practically much of the blind legislation which is now on the statute books of the commonwealth,” a newspaper reported, “and numerous laws which are noted for their farsightedness and sympathetic understanding.”

Also of interest:
For more on Sen. Lanius, check out: Champion for the blind.