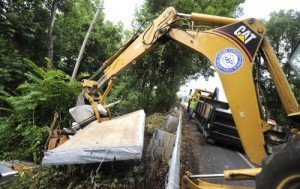 The beauty of much of Eberts Lane is marred by people who use it as a dumpsite. Here, the Spring Garden Township Public Works Department remove trash from the roadside in July 2012. Also of interest: Check out these stories and photos about unsung landmarks and sites around York County.

“You can spend your whole life in and around York, and never notice Eberts Lane.”
That’s how former York Daily Record writer Marianne Clay began her 1994 article on this overlooked York County road.
It’s also one of the York area’s best short cuts.
After Marianne wrote her story on the narrow, winding lane, I took a spin to try it out.
It was a wonderful all-too-brief excursion.
And it gets you from the city to the Galleria area in a matter of minutes.
Indeed, one hesitates to mention it here lest it becomes congested. It’s a little like suggesting that Coombs Tavern on York’s Pennsylvania Avenue has the area’s best-tasting, best-priced prime rib — which it does — and then find out that reservation slots are scarce — which they already are.
Eberts Lane, not far from Windsor Park, my previous post, is another of York County’s overlooked treasures.
Marianne’s story below describes the lane so well that we’ll let her take it from here:

You can spend your whole life in and around York, and never notice Eberts Lane. Never think you have reason to notice this street that originates on East Market Street between Albemarle and Lehman and ends in the hills of Pleasureville?
But Eberts Lane will surprise you. Though the lane runs less than two miles, it’s a jumble of contrasts.
On Eberts Lane, you find well-tended houses. Most were built in the housing boom following World War II and you find a junkyard and an asphalt plant.
You can order parts in a machine shop, buy orchids in a greenhouse, and if you’re a member, have lunch, eat dinner or listen to the bands play at VFW Post #556. Certainly Eberts Lane endures much. Route 30 cuts it in two. Route 83 crosses under it. Railroad tracks cross over it.
Even more serious, it falls under the jurisdictions of three governing bodies Spring Garden and Springettsbury townships and York City.
In the city, most of Eberts Lane runs one-way.
But you may not know how rural Eberts Lane can be. You can sit under ancient trees. You can fish in Mill Creek.
“The water’s much cleaner now,” said Landis C. Hays, who along with his wife, Margaret, has lived on the lane since 1949. “Good and clear. The creek used to be all kinds of color, blue, red, yellow, from the dye company.”
Hays knows about as much about Eberts Lane, particularly the portion south of Route 30, as anyone. Not only has he lived here since 1949, but his father lived on Eberts Lane in the 1930s, and for a time, his grandfather owned what is the biggest surprise of Eberts Lane, an 18th-century stone farmhouse.
“The farmhouse is the only remains of what was, according to an 1876 city map, a large and prosperous farm. The farmland is gone, and the house, instead of overlooking fields, is perched above Route 83. The house itself has been carved into apartments.”
Despite all this, the house remains a handsome reminder of the past. And high on an outside wall on its second floor, you can still find these words scratched into the stone: “Bilt by Nicholas J. Diehl and Frau, Catrina 1771.”
How long the Diehls owned the house isn’t certain, but by 1876, according to a city map, ownership had passed to Elias Ebert. But no Eberts Lane appears in the 1876 map.
Eberts Lane makes its first appearance on a 1903 map. But, according to the map, the Ebert family is gone. The farm is now called “The Hedges,” and is owned by an Edwin Myers.
“Oh, I don’t know about all that,” Hays said. “I always heard the street was named for a family named Ebert.
“And I know the old stone house was part of a farm. I can tell you where the barn was.”
When the Hays moved to Eberts Lane in 1949, the barn still stood.
“It was a gigantic barn, but it had mostly fallen down,” Hays said. “I used some of the timbers to build my house.”
Today you can still walk along the barn’s foundation.
In the 1940s, Hays’ grandfather bought the stone house from a businesswoman named Gladys Harvey.
“Gladys Harvey ran a nightclub called Harvey’s Little Club on the first floor,” Hays said. “She lived above on the second floor.”
George Wagner of York said he remembers delivering ice to the club in the late ’20s.
“I was working between high school and college for an ice company,” Wagner said. “And we often stopped there.
“As I remember. it was a cozy sort of place. There was a big dance floor on the first floor, with a bar in the back. I remember the house was very, very old, even back then.” Years ago, Wagner said, people came out Eberts Lane to get out of the city.
“It was like country,” Wagner said.
Until the 1950s, Eberts Lane was unpaved.
“We put oil on the road to keep the dust down,” Hays said.
Eberts Lane still resembles a country lane, and its rural flavor, despite being wedged between expressways and city street, is amazing. It never widens to more than two lanes, and much of it is shaded by trees.
“There’s more traffic on it now,” said Irene Klineyoung, a Eberts Lane resident, “but it’s still pretty quiet, still like country.
“It’s convenient to everything but it’s like an island of country in the middle of the congestion. That’s why we stayed here and built our house here.”
Traffic, she said, has increased since Route 30 was built. Some people, she said, have discovered the street’s worth as a shortcut between Route 30 and center city.
But when she and her family came to live here in 1942, they were surrounded by cornfields and apple orchards.
“We moved up from New Freedom,” Klineyoung said. “We just bought our trailer and rented the land while my husband was working in the ordinance plant. We liked it so much that when my husband got out of the service, we bought the land and built our house here.
“Eberts Lane just attracted us.”
James and Jayne Broughton of South Orange, N.J., agree with Klineyoung. The Broughtons have owned the stone farmhouse on Eberts Lane since 1989.
“We bought the house while we were visiting my brother who lives in York,” Jayne Broughton said. “We bought it as an investment property, but also because we love old houses. It was for sale, and it just drew us over.”
“That’s how the house is. That’s how all of Eberts Lane is. It pulls you in.”