Where did Camp Betty Washington Road get its name?

With housing growing in York Township’s Ore Valley like mile-a-minute vines and a construction project planned at the Mount Rose Interchange, Camp Betty Washington Road has been in the news.
What was Camp Betty Washington and who loaned her name to the camp?
An unsourced document in York County Heritage Trust archives tells the camp’s story:

It was started and used by York’s St. John the Baptist Episcopal congregation from the 1920s to 1940.
The church initially had used a camp for its Girls Friendly Society in York County near the Susquehanna River. But in drawing water from a nearby spring, it had unwittingly polluted Marietta’s water supply. The spring water passed through a pipe across the Susquehanna to Marietta on the east bank.
So, a cottage with a concrete swimming pool was purchased in Spring Garden Township, along what would become Camp Betty Washington Road.
Mrs. Fahs Smith of St. John’s backed the project, and the camp drew its name from an ancestor of Mrs. Smith.
The document did not connect the dots, but history lists Betty Washington as a sister of George Washington.
The camp grew to include tennis and volleyball courts, and two dormitories and a chapel later were added to the cottage.
Mr. and Mrs. J. Charles Heiges, the brains and brawn behind the camp, also operated a small zoo there. The 1933 flood ruined it and other parts of the camp, but not before the animals were freed.
After about 17 years in operation, the Heiges could not keep the camp going, and it was sold in 1940.
Oh yes, the mile-a-minute vines may have York County roots, too. The prickly vines, which may have been accidentally introduced in the county in the mid-1940s, are becoming the kudzu of the east. 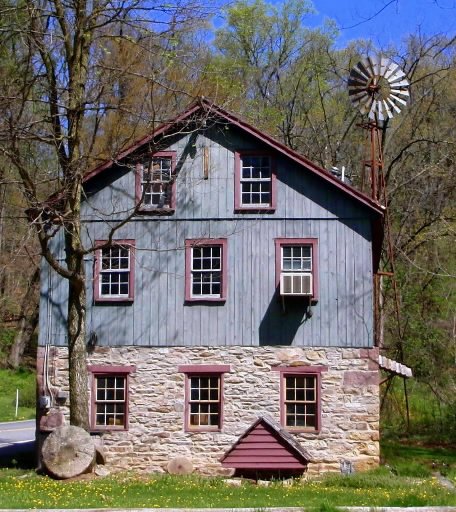 York countian Dianne Bowders submitted this photograph to the Daily Record/Sunday News, with the note: ‘Once a grist mill (1895), later a cider mill, and now a cabinet shop; only the mill wheel remains of the old grist mill. Located on Camp Betty Washington Road, York Township, York, PA.’

Related posts:
– So, can you find long-gone Springwood Park in this photograph?.
– 19th-century mines gave Ore Valley its name.
– Yo, Yoe never was Yohe.