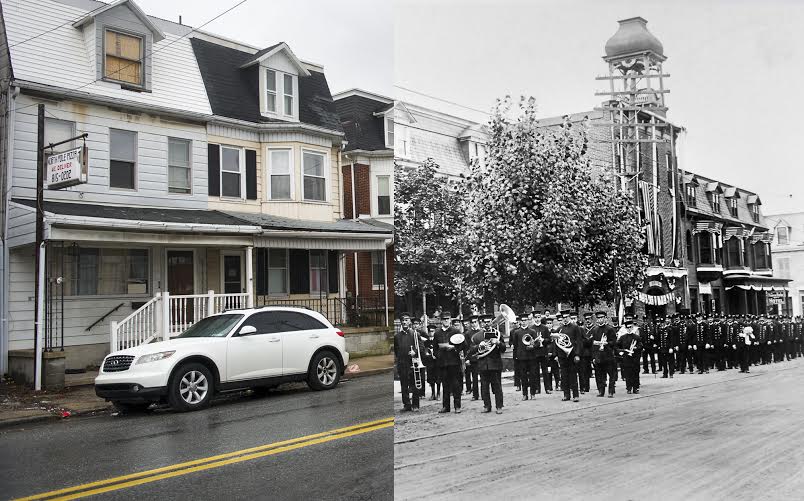 This Picturing History photo shows two scenes from North York, 100 years apart. The left photo shows North George Street, the main road through this borough that sits, yes, north of York City. The photo at right, courtesy of the York County Heritage Trust, shows the Liberty Fire Co. #1 in North York during the state firefighters convention in 1911. A special slider lets you see one view or the other. Check out the scenes of past Picturing History series. Also of interest: Find other town profiles in this York County towns category.

For centuries, southbound travelers passed through it coming into York or moving along its main street on the way to points north.

They did this via turnpike and trolley. If you want to make the Codorus Creek part of North York, add in canal as in the Codorus Navigation system.

Interestingly, Prospect Hill Cemetery has been one popular draw for more than 150 years.  Indeed, it won’t be long before bikers roll through the borough from points north along the York County Heritage Rail Trail extension being laid from Rudy Park to the city.

It’s interesting, too, that the borough in some ways remains defined by transportation. Literally. The narrow Loucks Road became the four-lane Route 30 bypass in the late 1960s. And Interstate 83 has hemmed in part of the borough’s east side since the late 1950s. Of course, North York’s proximity to these major roads continues its reputation as a transportation center.

So here are additional assorted facts and comments about this borough, north of York: 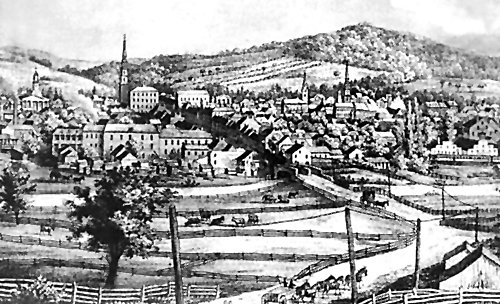 Founded: 1899, from a village formerly known as Mayersville, after cigar factory operator John Mayer. George Prowell wrote this some years after the businessman acquired land east of George Street in 1888: “John Mayer established a large cigar factory which soon caused the erection of a number of dwelling houses for his employees. This prosperous settlement became known as Mayersville.”

North York/Mount Wolf: What we said about Mount Wolf, farther north near the old turnpike can be said of North North: “Anyone traveling from York to Harrisburg – say Charles Dickens or Marquis de Lafayette – passed on the road near Mount Wolf.”

– Sweet fact: North York is home to Wolfgang Candy, a mainstay there for decades.

– Service orientation: North Yorkers could long point toward making things, whether it was furniture or cigars or clothes. Like many other places in York County, the borough is increasingly taking on a service orientation. Its sewing factory, for example, has been transformed into lofts.

Fun fact: Workers could take a short cut to work at York Safe & Lock by taking a swinging bridge across the Codorus at Small field. (See photo: Swinging bridge).

Parallels with West York: You could say that North York preceded West York along a path. As York became a city and grew in the Industrial Revolution at the turn of the 20th century, it expanded north of the Codorus Creek (North York) and west along the road to Gettysburg (Eberton became West York in 1904). 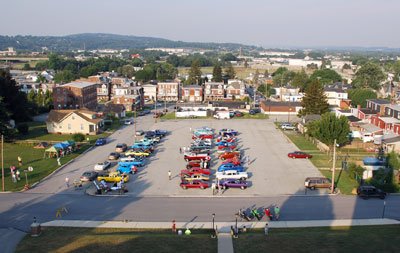 North York from high up on Messiah United Methodist Church. North York is home to several churches, including St. Peter’s Lutheran Church, which also sits prominently in the borough.