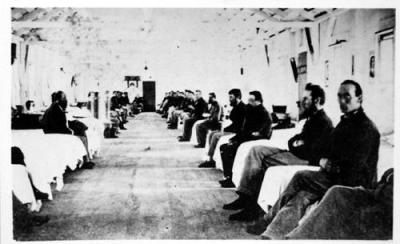 The Civil War-era U.S. Army General Hospital became a major site for treatment because of its proximity to Virginia and Maryland, where many battles took place, and its location on a major rail line. Here, in this York County, Pa., Heritage Trust photo, convalescents pose in one of the hospital wards at the Penn Park complex. The military hospital is an example of a York County history topic awaiting study. Background posts: Civil War nurse: ‘Dogs of War in our midst’ and Not all rebel wounded suffered after Gettysburg. 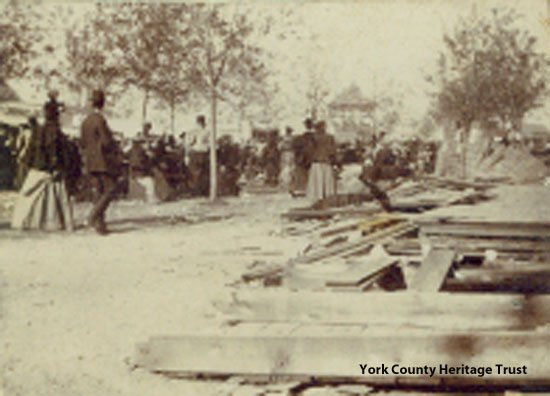 This gazebo aided the recovery of the wounded taken to the military hospital in York.
· Camp Security, Revolutionary War prisoner-of-war camp.
· Camp Stewartstown, World War II POW camp.
· James Smith, Declaration of Independence signer, from York County.
· Philip Livingston, Declaration signer, buried in county.
· Locally oriented biography of Loretta Claiborne, internationally known Special Olympian from York. Interestingly, Disney has produced a made-for-TV movie “The Loretta Claiborne Story” but no book-length work has been done.
· Vietnam War and York County.
· Powwowing, a form of faith healing mixed with superstition prevalent in York County for decades.
· The York Plan, a program of sharing manpower and machines to handle large defense contracts during World War II that became a national model.
· Jacob Loucks Devers. One short biography has been written but the life and times of this four-star general in World War II begs further exploration.
· Your own autobiography. No matter your prominence, your memoirs placed in a library could provide material for future researchers.
Further work on all of these projects can be started locally. The York County Heritage Trust has resources for most of these topics that can be supplemented by regional archives and deft exploration on the Web.
For scores of local Civil War posts, see /yorktownsquare/war/civil_war/ or Scott Mingus’ Cannonball.
Photos courtesy York County Heritage Trust