Old WSBA station: ‘Another part of history has gone’ 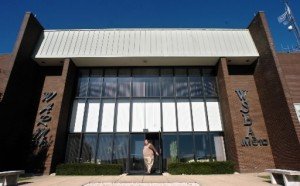 This shows WSBA-AM (910)’s current station in eastern York County – its second office and studio. The original along the Susquehanna Trail, north of York, was recently demolished. Background posts: Original WSBA station hands mic to demolition team and Carly Simon at WSBA: ‘What do you want to hear?’

Randy Shaffer of Manchester passed on some memories recently of the now-demolished WSBA building on the Susquehanna Trail.
The building, recently knocked down to make way for a commerce center, has sparked many memories typified by Randy’s conclusion: “But, another part of history has gone.” He brings out an interesting point about an underground studio that was part of the complex.
Here’s his e-mail:

Since I sent you this response, the WSBA Studios on Susquehanna Trail were destroyed.
I’m hoping someone did some photography inside before the building was shredded.
This building was always historical in my mind since it was the location of the original
corporate headquarters of Susquehanna Broadcasting before moving to York. The original
large studio configuration was still there from the 40’s. When the building was remodeled,
new studios and WSBA FM were built inside the old studios. The transmitters were actually
located in the original control room.
Prior to the announcement of the dismantling of Susquehanna, I always thought this
building would have made a great broadcasting museum. Susquehanna was known throughout
the nation as being a quality broadcaster. The original studio location of WSBA and founding
location of the corporate offices was a perfect mix. I had no clue it was slated for the wrecking
ball.
I looked around the site on Sunday after the demolition. It was sad to see audio tapes, transmitter logs and old bumper stickers from the late 60’s ground into the dirt by tractor tires. I took those stickers to the building in the early 1980’s when the Susquehanna Broadcasting Explorer Post occupied the building. The scouts raised money to repaint and carpet the studios and we were given old equipment to outfit the studios as they were in the early 70’s. The equipment came from a storage building that the station rented. Inside were lots of old promotional items.
I grabbed a bunch of the bumper stickers and took them back to the transmitter site.
The other unique feature of this site was the underground fallout shelter studio. There were radio
links to county emergency operations as well as basic broadcasting equipment. The only time
that I know of, that the facility came close to being used was during the TMI accident.
Sorry, didn’t mean to get into all of that. But, another part of history has gone.