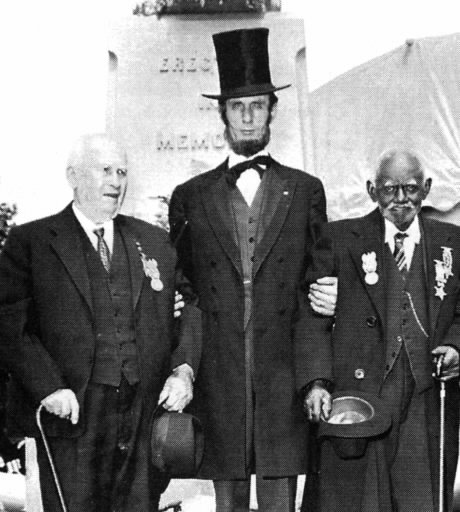 The black Civil War veteran pictured here is John Aquilla Wilson, known as ‘Quil,’ of Fawn Township in southeastern York County, Pa. He enlisted in the United States Colored Troops, 32nd Regiment, in 1864. Wilson died at the age of 101, then one of the last surviving Civil War vets in York County. (See additional photos below). Background post: Black soldiers from York County served in ‘Glory’ unit, Part I and ‘Glory unit,’ Part II and ‘One of the shells found its mark.

The 150 anniversary of the Civil War has not yet started and new insights into the war have started to flow forth.
State-level efforts to explore the war are spotlighting black soldiers who fought with northern troops, including John Aquilla Wilson of York County.
A Wilson granddaughter, 87-year-old Isabella Phillips, lives in southeastern York County’s Chanceford Township.
She gave insight into why her grandfather, who helped raise her and lived to be 101, served. He wanted black people to be able to own property and vote, she said.
“He wanted to have the same rights as everybody else,” she told the York (Pa.) Daily Record/Sunday News.
She also confirmed that a photo (above) of Wilson with a Lincoln impersonator and another Civil War vet was, indeed, her grandfather. No supporting material with that photo, part of the York County Heritage Trust collection, identified those pictured.
Here is the full story (10/12/10) about Wilson, soon to be honored with an event, the Pennsylvania Grand Review, in November:

As a young black teenager, John Aquilla Wilson joined the local militia in Wrightsville and helped prevent the Confederates from crossing the bridge across the Susquehanna River.
Less than a year later, in 1864, he joined the 32nd regiment of the United States Colored Troops. He trained at Camp William Penn outside of Philadelphia and skirmished with the rebels in South Carolina.
Wilson was honorably discharged in August 1865 and lived to be 101 years old, one of the last surviving Civil War veterans in York County.
Wilson is one of 100 black soldiers who will be highlighted in Pennsylvania this fall as part of planned events associated with the upcoming 150th anniversary of the Civil War.
“It’s such an honor,” said Chandra Beale, one of Wilson’s great-granddaughters who lives near Towson, Md.
One of Wilson’s granddaughters, 87-year-old Isabella Phillips, lives in Chanceford Township. She lived with her grandfather for a period of time, and he helped raise her.
Her grandfather and his brother, Ned, joined the war at the same time, Phillips said. Wilson wanted black people to be able to own property and vote.
“He wanted to have the same rights as everybody else,” she said.
Phillips recalled that they used to go to Gettysburg every year so he could participate in a parade that honored Civil War veterans.
In one old photo, he is standing beside an Abraham Lincoln impersonator.
Phillips said her grandfather didn’t talk much about the war. He died at 101 and is buried in Fawn AME cemetery near Gatchellville.
“He was a good Christian man,” Phillips said.
Scott Mingus Sr., a local author on the Civil War, said he found that Wilson was one of the defenders of the bridge at Wrightsville.
Most of the black men who volunteered came from Columbia, Wrightsville and Fawn Grove, Mingus said. Many of them worked at the Maulty-Case rolling mill in Columbia.
The men dug trenches in Wrightsville and formed a battle line to stop the Confederates from advancing, according to Mingus and James McClure, author of “East of Gettysburg.” One of Wilson’s fellow soldiers died when his head was taken off by a cannonball.
Union Col. Jacob Frick later ordered that the bridge be burned to prevent the rebel troops from crossing the river, Mingus said.
Wilson went home after the fighting in Wrightsville but later joined the 32nd regiment of the United States Colored Troops.
His regiment served in South Carolina and was involved in the battle of Honey Hill in November 1864, according to Dickinson College’s “House Divided” web site.
Phillips still has her grandfather’s discharge paper from the Civil War. It states that he was honorably discharged Aug. 22, 1865, in Hilton Head, S.C.
Beale and her family will participate in a parade to honor the black soldiers during the Pennsylvania Grand Review in Harrisburg next month.
It will be similar to the event in 1865 to honor the black soldiers who fought for the Union, according to the state’s www.visitpa.com website.
Black soldiers were not allowed to participate in the Grand Review in Washington, D.C., after the Civil War. The women of Harrisburg organized the Pennsylvania Grand Review to recognize their efforts.
Wilson’s descendants have followed in his footsteps by serving their country, Beale said. It makes her feel proud.
She said she wishes she would have asked her father more questions about her great-grandfather before he died.
“I feel like I’m starting to know my great-grandfather,” Beale said.
If you go
Descendants of John Aquilla Wilson will participate in the Pennsylvania Grand Review, which will be Nov. 4 through 7 in Harrisburg.
It will include a parade 9 a.m. to noon Nov. 6 in downtown Harrisburg.
For more information, go to www.visitPA.com.

Isabella Phillips, granddaughter of John Aquilla Wilson, was raised by her grandfather.