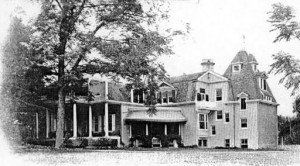 Springdale Mansion anchored York’s south side from when it was built at Congressman Charles Barnitz’s residence in 1828 to when it was demolished in 1954. See drawing of the mansion’s carriage house below. (Photos courtesy, York County Heritage Trust.) Background post: Former Hahn mansion: ‘I thought it would make the most spectacular funeral home’ and About Davy Crockett at Springdale Mansion: ‘He is the biggest fool I ever saw’.
Springdale Mansion figured prominently as part of a York tour presented in my York Sunday News column. See ‘A Sunday drive through York’s past’.

Some additional details about Springdale that I did not include because of space:
— The Springdale estate, under Grier Hersh’s ownership, expanded to 400 acres from Boundary Avenue to Violet Hill.
— York’s first golf course was part of that estate. York College later was built on part of that golf course.
— York Hospital sits on land that was formerly part of the estate.
— Charles Pechenek acquired the Springdale property from the Hersh estate in 1945, and remodeled the carriage house into his own residence.
— He demolished the now-deteriorating mansion in 1954.
— Fully built up, the mansion included 40 rooms.
— Here’s a description of the mansion’s ballroom, from a Springdale booklet at the York County Heritage Trust:

The ballroom was on a lower level than the reception hall reached by wide steps from the entrance. Four large windows at each corner made the room appear octagonal. The leaded windows were called birdseye glass because each pane had a bubble blown in it to resemble a bird’s eye. The steps leading down to the ballroom provided a kind of stage by which costumed ladies could make an entrance .. . 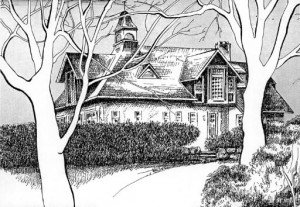