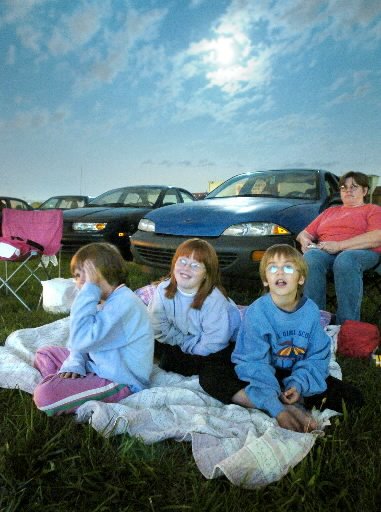 Residents enjoy a show at the portable York Drive-In at York Expo Center. The developer of the former Stony Brook Drive-In site in Springettsbury Township is looking for reminders of the theater’s glory days.

Any doubt that York County loves its history?
In recent months, we’ve posted calls for memorabilia from White Oak Park and York County Park System. The Glen Rock Carolers are publishing a history book. The York Symphony, celebrating its 75th anniversary in 2007-2008, has just published a book.
Now the developer of a senior citizen apartment building at the site of the former Stony Brook drive-in is seeking memorabilia from the old theater… .

David Hogg is seeking signs, speakers, show advertisements, cola cups and tickets for display in the community room of the senior complex. People with something to donate or loan can call Judy Bunnell at 718-2992
The Springettsbury drive-in is one of many such hangouts that ringed York in the days before the land became too valuable for such use. Today’s Haar’s Drive-in near Dillsburg and the portable York Drive-in at the York Expo Center are the last to regularly show films.