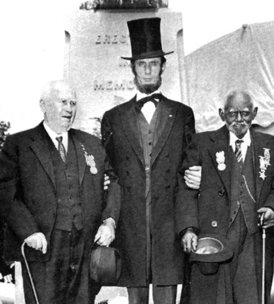 Two aging Civil War soldiers flank a Lincoln impersonator. The black veteran is John Aquilla Wilson, known as ‘Quil,’ of Fawn Township in southeastern York County. He enlisted in the United States Colored Troops, 32nd Regiment, in 1864. Wilson died at the age of 101. Background post: Black soldiers from York County served in ‘Glory’ unit, Part I and ‘One of the shells found its mark.
Ever see the film “Glory” on the big screen?
A couple of years ago, York city brought the film starring Denzel Washington, Morgan Freeman and Matthew Broderick to the Strand-Capitol. The cinematography was beyond description and the audio coming from the Capitol Theater’s renovated sound system made you feel like you were in battle.
I was there to introduce the film, the first feature-length treatment of the role of black soldiers in the Civil War, and to give some closing remarks.
At the end, people were so captivated by what they had just witness that they almost seemed in a daze. It wasn’t the late hour, nor my usual monotone delivery that quieted people this time.
The film on the big screen literally left people speechless.
Anyway, here are some notes from that night, many of which might be in the “Gee, I didn’t know that category.” …

– The 54th Massachusetts’ performance under fire answered the question from skeptics, “Will blacks fight.”
– The 54th was not the first black combat regiment, but it was the first black unit to make headlines and be recruited in the north.
– Altogether, 179,000 black soldiers and 10,000 sailors fought in combat units for the North. They represented 10 percent of the Union fighting force by war’s end.
– The South flirted with the idea of black soldiers, but never mobilized before the war ended.
– In addition to at least four black soldiers from York County serving in the 54th, 23 came from Columbia, Lancaster County.
– The 54th had its fair share of Pennsylvanians: 22 percent of the regiment was made up of Keystone State freedman. The film suggests many were just freed or fugitives, but many combatants actually had been freed for some time. Massachusetts had to find soldiers from other states because not enough blacks could be recruited in that state to fill all 1,000 slots in the regiment.
– As these local black troops marched through Boston, they trekked past the site where Crispus Attucks died in the Boston Massacre. When York’s Crispus Attucks Community Center was founded in 1931, local members of the 54th were probably dead. But black soldiers Joseph J. Howard, John A. Wilson and Levi Taylor, who served in other units, were still alive.
– Scores of freedmen from York County served in the Union Army. Members of the Barton, Jamison, Jefferson, Davis, Stephenson, Lee and Bones families were among those who served.
– The fighting at Fort Wagner depicted in the film took place on July 18, 1863. That came just days after the Confederate occupation of York. So, while Confederates were marching at will through York County, black soldiers from York County were fighting rebels in the South.