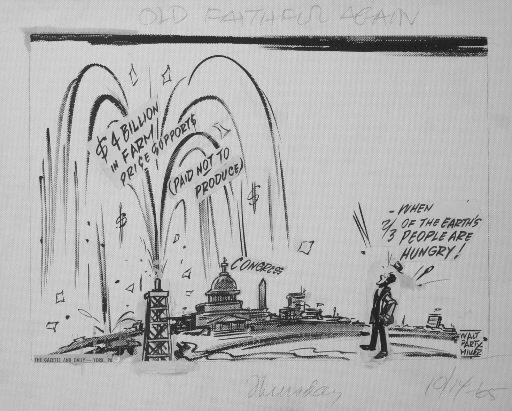 Cartoonist Walt Partymiller reflected J.W. Gitt’s views throughout the Cold War. Also of interest: Reflecting on J.W. Gitt’s Gazette and Daily in York, Pa.
From 1915-1970, J.W. Gitt was a small-town newspaper editor with elite friends — Albert Einstein, Henry Wallace and Linus Pauling, for starters.
He gained the international spotlight in 1948, when his newspaper endorsed Progressive Party candidate Henry Wallace for U.S. president.
The Gazette and Daily was the only commercial daily in the United States to endorse Wallace. The former U.S. veep also gained a nod from the Communist Daily Worker… .

Mary A. Hamilton worked for Gitt during the 1960s and has become the foremost expert on the internationally known owner of The Gazette and Daily.
The York Sunday News ran an excerpt from the former St. Bonaventure University journalism professor’s book “Rising from the Wilderness: J.W. Gitt and His Legendary Newspaper – The Gazette & Daily of York, Pennsylvania.”
As an introduction to the piece stated, Hamilton offers a historical perspective on Gitt’s Cold War efforts to educate the public on issues associated with the atomic age. This is particularly germane as America confronts Iran’s aspiration to become a nuclear power.
Hamilton wrote: