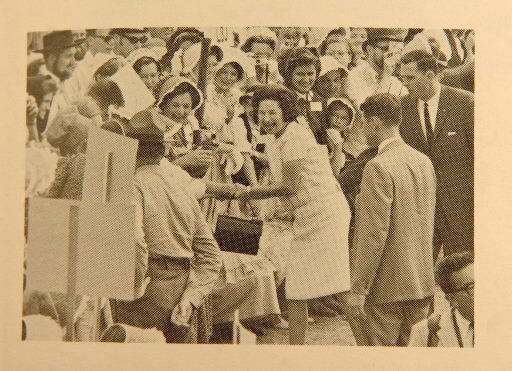 Some York countians took special note of Lady Bird Johnson’s recent death.
They met her when she and her husband, President Lyndon Johnson, visited Dallastown as part of that borough’s 100th anniversary.
Neiman Craley, York’s sole Democratic congressman in the past 50 or so years, corralled him for the ceremony… .
Well, Johnson’s speech delivered that day can be accessed.
The Texan liked to visit Pennsylvania:
“We look forward to your hospitality, your friendship, and your beautiful countryside,” he told Dallastownians.
And he gave those assembled a little history lesson:

“As Congressman Craley said to you, as a native of Texas I have come here today to acknowledge a debt. Your town was named in honor of a great citizen of Pennsylvania-President Polk’s Vice President, George Dallas. George Dallas wanted Texas in the Union. He made it an issue in the campaign of 1844, and that helped President Polk get elected.
Incidentally, it also helped a later President who happened to come from Texas.”

And a comment about small-town life:
In the little town in Texas where I grew up, we used to say that in small towns the girls are fonder, and the dinner pails are fuller.”