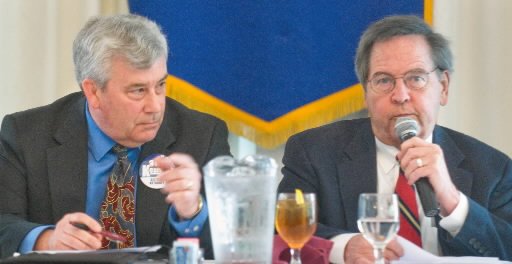 Challenger Tom Kearney and Stan Rebert squared off in a Rotary forum earlier this month. The forum was streamed live via the York Daily Record’s Web site, www.ync.com/ydr. (Updated: Stan Rebert conceded defeat in the primary to Tom Kearney at about 10:30 p.m. on primary day. Kearney faced no opposition in the November election and was elected as York County’s 11th D.A. in the past 60 years.) Background posts: York County Dems slumped, GOP prospered in 1980s and Noted York family produced Pa. Supreme Court justice and For years, York countians part of major court cases

If Tom Kearney unseats Stan Rebert to win the Republican primary today, he will have displaced a York County institution.
Of course, Kearney is an institution himself, handling the defense of many of the highest profile capital cases in the past two decades.
It’s a battle between York County’s most prominent defense counsel vs. its top law enforcement officer.
Whoever wins, the district attorney’s office has housed some of York County’s highest profile lawyers for decades.
The following were York County’s district attorneys since 1950, according to Georg Sheets’ “Lawyers and Leaders”: