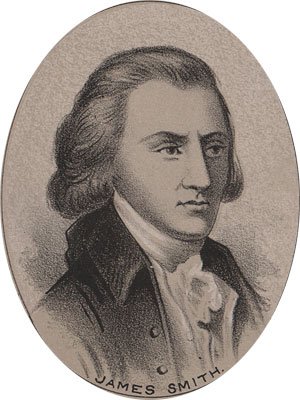 James Smith has no building with his name on its side in York County. But he does in Delaware. Also of interest: First Presbyterian Church is looking to solve some mysteries including one involving James Smith.

James Smith, York County’s Declaration of Independence signer, is scarcely known in his home county, let alone in other states.

So it’s intriguing that the University of Delaware named a residence hall after the man who spent most of his life in York County and is buried here.

In fact, no buildings in York County bear his name… .

Unfortunately, the opportunity to know much more about Smith was snuffed out by a fire which destroyed many of his papers.
But one thing stands out:

He signed the Declaration and Pennsylvania’s first constitution in the summer of 1776.

Not bad for a country lawyer.